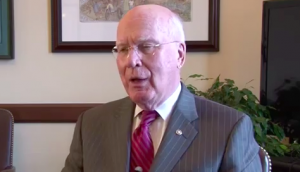 Is this the latest salvo in the left’s war to implement a hyper-regulatory state? : Do Democrats see the United Kingdom as a model for their version of the surveillance society? : What on earth could Sen. Patrick Leahy (D-VT) be thinking coming up with legislation like this? : According to Declan McCullagh of C|Net, Sen. Leahy thinks it’s perfectly fine for law enforcement officials to troll your emails, twitter, and Facebook without a warrant. : It’s a perverse exploitation of the law, which hasn’t caught up to 21st Century standards — and any American who values their liberty should be appalled by this gross incident of congressional overreach.

Leahy’s rewritten bill would allow more than 22 agencies — including the Securities and Exchange Commission and the Federal Communications Commission — to access Americans’ e-mail, Google Docs files, Facebook wall posts, and Twitter direct messages: without a search warrant[3]. It also would give the FBI and Homeland Security more authority, in some circumstances, to gain full access to Internet accounts without notifying either the owner or a judge.

It’s an abrupt departure from Leahy’s: earlier approach[4], which required police to obtain a search warrant backed by probable cause before they could read the contents of e-mail or other communications. The Vermont Democrat: boasted[5]last year that his bill “provides enhanced privacy protections for American consumers by… requiring that the government obtain a search warrant.”

Leahy had: planned a vote[6]: on an earlier version of his bill, designed to update a pair of 1980s-vintage surveillance laws, in late September. But after law enforcement groups including the National District Attorneys’ Association and the National Sheriffs’ Association organizations: objected to the legislation[7]: and asked him: to “reconsider acting” on it, Leahy pushed back the vote and reworked the bill as a package of amendments to be offered next Thursday. The package (PDF[8]) is a substitute for: H.R. 2471[9], which the House of Representatives already has approved.

Here are the revisions:

âœ­ Grants warrantless access to Americans’ electronic correspondence to over 22 federal agencies. Only a subpoena is required, not a search warrant signed by a judge based on probable cause.

âœ­ Permits state and local law enforcement to warrantlessly access Americans’ correspondence stored on systems not offered “to the public,” including university networks.

âœ­ Authorizes any law enforcement agency to access accounts without a warrant — or subsequent court review — if they claim “emergency” situations exist.

âœ­ Says providers “shall notify” law enforcement in advance of any plans to tell their customers that they’ve been the target of a warrant, order, or subpoena.

âœ­ Delays notification of customers whose accounts have been accessed from 3 days to “10 business days.” This notification can be postponed by up to 360 days.

Now, this afternoon, The Hill reported [10]that the senator had no such intention to support a bill with warrantlees searches.

CNET has it wrong,” an aide tweeted from Leahy’s account. “Sen. Leahy does NOT support an #ECPA exception to search warrant requirement [for] civil enforcement [for agencies] like FTC, SEC.”: A Judiciary Committee aide confirmed to The Hill that Leahy “does not support broad carve-outs for warrantless email searches.”: Leahy is pushing a bill that would revise the Electronic Communications Privacy Act (ECPA) of 1986. The Judiciary Committee is scheduled to vote on Leahy’s measure next week.

But we must remain vigilant. As long as Federalism remains under threat, we must keep a close eye on bills, from both parties, that seek to make us safer — while sacrificing our freedoms in the process.