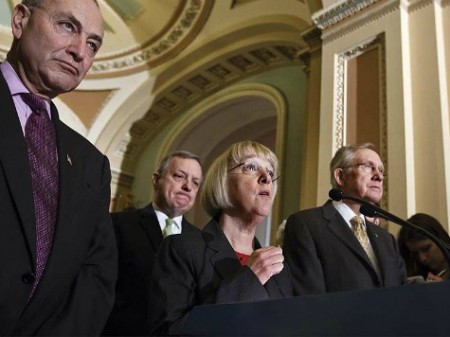 So, the lying Democrats strike again[1] and the media stays silent.

If and when Washington is pushed to the brink of another government shutdown in December, as the just-passed stopgap funding measures approach their expiration, we’ll inevitably hear a lot of sound and fury from Democrats about “extreme” Republicans holding crucial federal spending “hostage” in pursuit of an ideological agenda. Setting aside arguments over the wisdom and efficacy of using a shutdown threat as political leverage (which was attempted and failed in 2013), Senate Democrats are currently engaged in precisely this sort of conduct, for reasons that aren’t likely to impress many voters. Yesterday, Harry Reid and friends filibustered a spending bill that would fund the VA — which Democrats routinely claim is underfunded, as a means of explaining away the department’s systemic, deadly corruption and concealing the disastrous failure of government-run healthcare:

Democrats Thursday blocked the Senate from turning to a $78 billion spending measure for the Department of Veterans Affairs and military base construction. They and the White House argue that it’s part of an overall GOP budget framework that shortchanges spending on other domestic programs…The White House has issued blanket veto threats against every spending bill, saying they shortchange domestic programs while exempting the Pentagon from the return of automatic spending curbs that would otherwise freeze its budget. Republicans note that many Democrats supported the bills when they were considered by the Appropriations Committee.

Notice the media just ignore this even as they claim that the Republicans are the “hostage takers” on the budget.