SERIOUSLY!? San Juan Mayor BACK On TV – Wearing ANOTHER Shirt That Speaks Volumes! 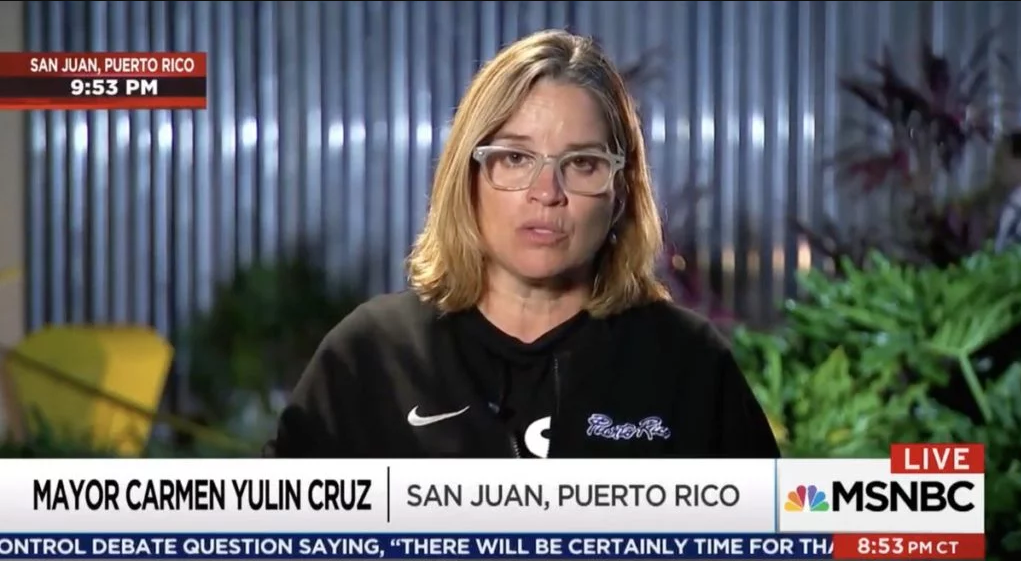 Carmen Yulín Cruz has taken to the medium of freshly printed t-shirts and baseball caps to get her opinions across. First, she appeared on Anderson Cooper wearing a shirt that said HELP US WE ARE DYING. 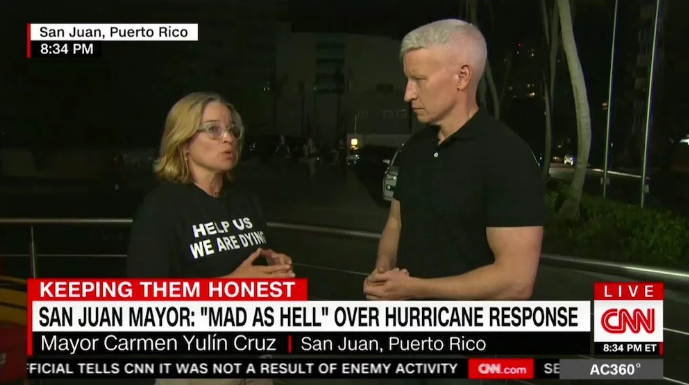 And half of America asked: If you’re all dying, how did you manage to get a specialty shirt printed up in time? Or do you have an entire box of those shirts on hand just in case? We’re dying, but we still have a vibrate shirt printing industry!

Puerto Rico is recovering from being hit with Hurricane Maria, which made landfall on Wednesday, September 20th. Puerto Rican Governor Ricardo Rosselló said that it might take months to restore power fully after the entire power grid went out, cutting off all 3.4 million people on the island.

But San Juan Mayor Yulin still struggles with optics in dealing with the mainlanders. In recent days, she made the news for staging a press conference, where she claimed that they were without supplies, food and potable water… in front of stacks upon stacks of the very supplies she was crying for. Turn around, Carmen[3]. But it wasn’t til later that we found out that the reason that Puerto Ricans were suffering from a lack of supplies was because the Teamsters Union who were supposed to schlep the aid around didn’t bother to show up to work.[4] A full 80% of teamsters decided they’d rather stay in bed that day.

Maybe she just has low self-esteem and is putting herself down, or perhaps she’s illiterate. Or she’s aligning herself with the Wicked Witch and branding herself a “nasty woman.”

If it’s Hillary you want, then you won’t get much help. Most of the media is going along with Yulin’s line that Trump is blocking supplies from entering Puerto Rico, and conservatives are in overdrive trying to figure out that media narrative.

For those who don't let the truth get in the way of a good story here's the actual timeline of massive federal response in Puerto Rico-> pic.twitter.com/FnWgpnRy7A[6]

And Governor Rosselló? He says of Trump, “The Administration and the President, every time we’ve spoken, they’ve delivered…” So maybe it’s just you, Yulin, you and the Teamsters who are to blame.

Rosselló has even picked up the Trump style of tweeting[8], saying:

“The fact is that Puerto Rico has been destroyed by two hurricanes. Big decisions will have to be made as to the cost of its rebuilding!”