The Brit’s version of Bernie Sanders[1] just won in a landslide the leadership of the Labour Party. Actually, he’s more communist than socialist, just as Sanders is. Jeremy Corbyn is a populist on the Left and people thronged to him, calling for more refugees, not fewer. Sounds almost as if the Islamists and the communists are now the majority in Britain. That’s sad. He paints himself as anti-austerity and ‘fairness’ is the center point of his platform. Freebies for all. The 66 year-old, whose policies have been compared to those of radical Leftist Greece’s Syriza and Spain’s Podemos, won after clinching 59.5 percent of the vote, giving Britain its most Left-wing leader in decades among the main parties. Union communists and socialists are thrilled across the globe. Sanders must be heartened as well. 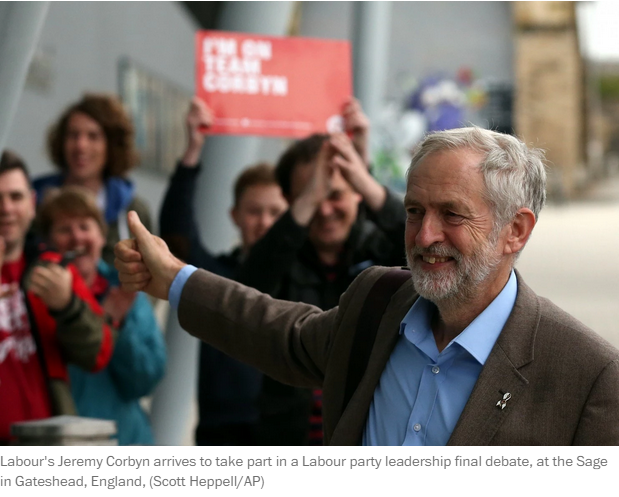 Jeremy Corbyn’s stunning transformation from perennial leftist rebel to leader of Britain’s Labour Party upended British politics Saturday and delivered a striking message worldwide: At this anti-establishment moment, parties of the left are just as vulnerable to populist takeovers as parties of the right.

The Corbyn victory represented an extraordinary rebuke to Labour’s more centrist powers-that-be, especially to former prime minister Tony Blair, who had campaigned vigorously against Corbyn and who argued that his selection would mean the party’s “annihilation.”

But interventions from Blair and other party heavyweights apparently did little to halt Corbyn’s momentum and may have even backfired.

As the summer campaign progressed, the former union organizer evolved from a fringe candidate who barely made it on the ballot to a grass-roots phenomenon who, white-haired and rumpled at 66, stirred the passions of a new generation of Labour activists.

Corbyn’s rise echoes that of another senior-citizen socialist who has come out of nowhere this year to rattle his party’s center-left establishment. Like Corbyn, Sen. Bernie Sanders (I-Vt.) has been waging a surprisingly effective insurgency in a campaign that was once thought to be unwinnable.

“If you’re Bernie Sanders, you’ll take some heart from this,” said Tim Bale, a politics professor at Queen Mary University of London. “If you’re Hillary Clinton, you’ll be nervous.”

While Sanders is still fighting uphill[3] in his effort to outmaneuver Clinton for the Democratic nomination, Corbyn’s once-quixotic-seeming campaign ended Saturday with a landslide win. Nearly 60 percent of voters backed him over three more centrist rivals just four months after Labour suffered one of its worst-ever defeats[4] in national elections.

“We don’t have to be unequal,” Corbyn, looking professorial in spectacles and an open-collar blue shirt, told a crowd of cheering supporters at a London conference center. “It doesn’t have to be unfair. Poverty isn’t inevitable. Things can — and they will — change.”

Corbyn, who is often photographed biking around his posh north London district, pledged to unify the Labour Party’s polarized factions. He may be helped in that task by Tom Watson, who was elected as deputy leader and is seen as a possible bridge between leftists and centrists.

But within minutes of the results being announced, it became clear just how difficult it will be to hold Labour together. Half a dozen prominent Labour politicians announced they would not serve in Corbyn’s shadow cabinet, the opposition party’s main vehicle for challenging the government’s policies.

The Conservative Party also unleashed a stinging attack that previewed what will likely be a relentless drumbeat for as long as Corbyn remains leader of the opposition. Defense Secretary Michael Fallon charged that Corbyn’s win had made the Labour Party “a serious risk to our nation’s security, our economy’s security and your family’s security.”

Blair and a chorus of other Labour titans had previously warned that a Corbyn victory would condemn the party — which governed Britain as recently as five years ago and has traded power with the Conservatives for the past century — to a long walk through the political wilderness.

But Corbyn capitalized on a widespread grass-roots backlash against the political establishment that has grown out of the wreckage of the Iraq war and the widening wealth gap since the Great Recession.

Although Corbyn has served in Parliament for more than three decades, he succeeded by portraying himself as a straight-talking political outsider who is unafraid to challenge the powerful, even within his own party.

Corbyn has often bucked the Labour leadership on critical issues — including the vote to authorize the Iraq war — and his message resonated among Labour voters who believe their party has been reduced to a pale imitation of the Tories, especially as it lurched to the center under Blair.

No one could accuse Corbyn of mimicking the Conservatives, and his win is likely to sharpen the ideological divide in the U.K.

In his victory speech, Corbyn slammed Prime Minister David Cameron’s Conservatives for presiding over “grotesque levels of inequality” and for creating “an unfair welfare system.” Sound familiar? As the win was announced at a conference center in London, supporters chanted “Jez We Can!” while centrist figures looked shell-shocked. Corbyn later thanked his supporters in a nearby pub, where he joined in a rendition of the traditional socialist anthem “The Red Flag.” Britain is circling the drain and it’s a race to see who finishes her off – the Islamists or the communists. A similar fate awaits America if Bernie Sanders ascends. The veteran member of parliament has said he will oppose Britain joining in air strikes against the Islamic State Jihadist group over Syria. Addressing tens of thousands of people at a pro-refugee rally in London later on Saturday, Corbyn alluded to Cameron’s reference to air strikes as part of the solution to the migration crisis. “Surely our objective ought to be to find peaceful solutions to the problems of this world,” said Corbyn, to huge cheers. The ultimate peace in our time spiel as the world unravels and burns. Corbyn’s solution is to submit to the Caliphate. There goes Europe. 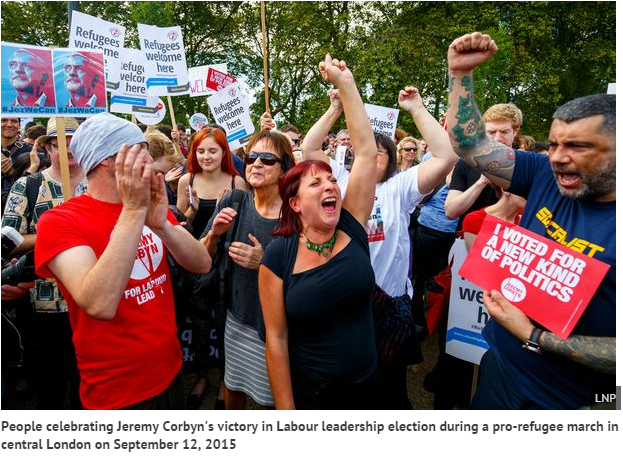