Wow… I just love a good ole Liberal media meltdown[1], don’t you? Blood dripping from their eyes, heads exploding… bring on the popcorn! Sheriff Clarke nailed it – the voters will decide if The Donald ascends to the presidency, not the sycophant media. The only reason the media have their panties in a twist over the McCain brouhaha is because they hate Trump. They hated the Vietnam War as well, but they’ll defend McCain no matter what – as long as it gets rids of The Donald threat[2]. In reality, the Left loved the communists in Vietnam. But you see, they hate Trump even more and McCain is in reality a Progressive – albeit on the Right, he’s still a Progressive and their comrade. Sheriff Clarke was simply pointing out that this is still a Constitutional Republic and the media and the elitists don’t get to have the last word on who is a candidate and who isn’t – not yet, anyway. 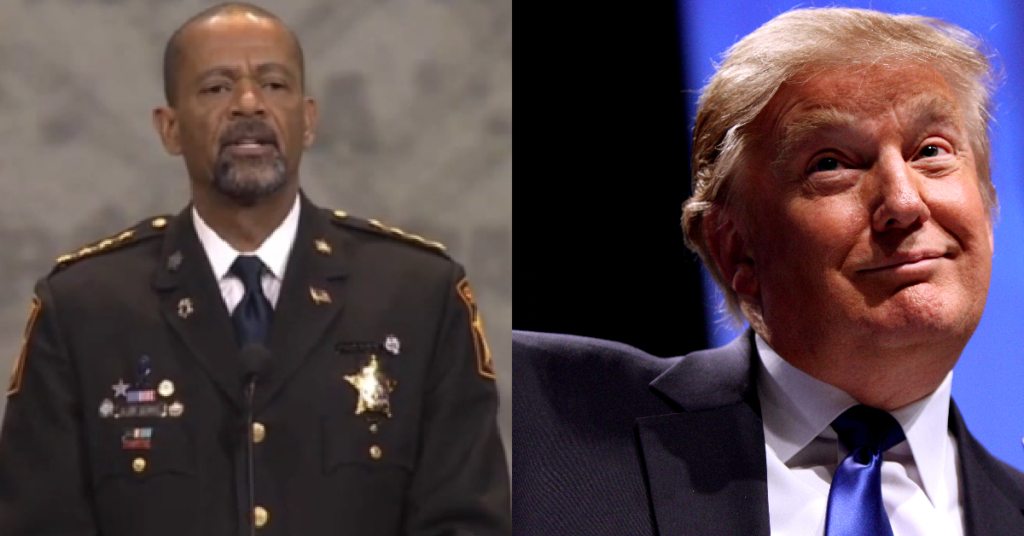 Responding to a The Wall Street Journal article questioning how much longer Donald Trump’s “political and media apologists on the right will keep pretending he’s a serious candidate,” Milwaukee County Sheriff David Clarke[4] took to Twitter to weigh in on the issue in his typically bold and straightforward manner.

Clarke tweeted, “Here we go again. The VOTERS get to decide if he is a serious candidate dammit, not the media elite. WE THE PEOPLE!”

The billionaire businessman once again became the center of attention this weekend due to controversial comments taken out of context and twisted to support a media narrative.

Trump was asked a question about Arizona Sen. John McCain[5], who has been highly critical of Trump, saying his popularity in the polls was only due to riling up the “crazies” in the GOP base.

Trump’s trouble came when he told a bad joke that fell flat, saying of McCain, “He’s a war hero because he was captured. I like people who weren’t captured.”

Of course he followed that up by agreeing that McCain really was a war hero, and noted that his problems with McCain stem from differing opinions on policy, something he reiterated and expanded upon over the next couple of days.

But the liberal media, including Fox News, have focused solely on the one line from Trump, and he has been virtually surrounded by a firing squad that includes many of his fellow GOP candidates, some even demanding he drop out of the race.

According to Western Journalism[6], however, not everyone hates Donald Trump, with some still offering their support for his candidacy, if not his specific comments about McCain.

Sheriff Clarke is one of those, and the media needs to realize that, love him or hate him, Trump is a real candidate in this presidential race, for whatever it is worth.

This tactic doesn’t seem to be working very well for the Leftist media. Trump is even further ahead in the polls now than before the McCain snafu. Go figure – he’s playing to the masses and they are ticked off over illegal immigration and refugee resettlement. He’s not backing down either. I understand he’s on his way to the border.[7] Gotta admit, Trump has a set and a spine. Going to the border is also a brilliant political maneuver. When the media can get this apoplectic over 23 little itty-bitty words on Twitter from Sheriff Clarke defending the Trumpster, you know you are in for one hell of a show.