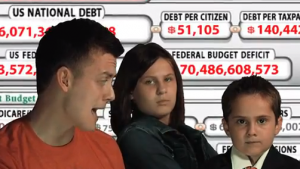 Justen Charters, co-founder of Resistance 44[2], is sick of Obamanomics. : After all, President Obama : is “the six trillion dollar man” who “doesn’t have a budget plan” : and “basic economics is something he doesn’t understand.” : Enjoy! #obamastyle

P.S. Justen, you didn’t make this song — somebody else made that happen.