A large group of so-called “environmentalists” in Seattle who claimed they were trying to stop a sea-going oil rig from leaving port–you know, to “save the earf,” or something–now stand accused of destroying an underwater sea life preserve that stood in their way as they protested the oil company. 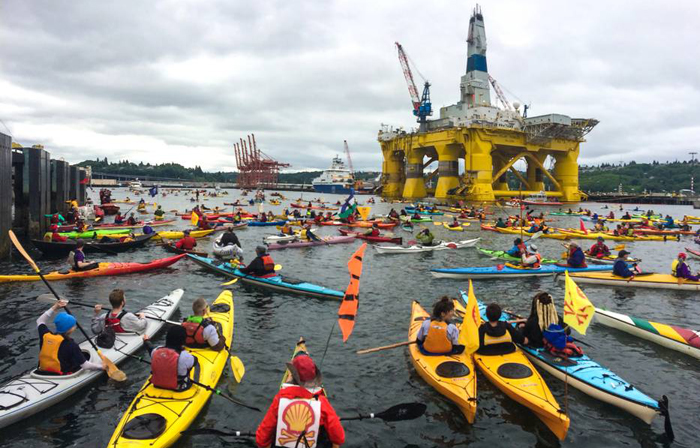 You might recall earlier this year that a group of enviro-wackos who gave themselves the cutsey name “kayaktivists,” organized a blockade consisting of kayaks to try and stop Shell Oil’s giant floating oil rig the Polar Pioneer from leaving Seattle ports on its way to Alaska to do some oil exploration (exploration that was approved by the Obama administration, by the way).

Well along with this silly flotilla of kayaks, these enviro-wackos also bought and outfitted a barge to act as a sort of home base while they floated around protesting.

It turns out that they anchored their barge irresponsibly with giant concrete blacks and hunks of metal and they threw those heavy, destructive devices right smack dab into an underwater sea life preserve destroying a large section of the place that has served as a protective home to endangered sea creatures.

It was up to the local sea life group to desperately try and repair the massive damage the enviro-wackos perpetrated. The group, called the Global Underwater Explorers (or GUE), put out a press release[1] about the damage and the clean up.

SEATTLE, WA – Two teams of GUE Seattle SCUBA divers entered the water today at 7:00 AM and located the debris field consisting of concrete blocks and steel cables. The five GUE Seattle divers attached mooring line and buoys so a commercial salvage operation could easily locate and remove the debris. At approximately 9:00 AM a commercial dive team from Global Diving & Salvage arrived on site and deployed surface-supplied divers into the water. After approximately three hours of work, the Global Diving & Salvage dive team had safely successfully removed all debris without causing any further damage to the dive park.

On Monday, May 19th, 2015, an environmental activist group moored a barge known as the Solar Pioneer in Alki Seacrest Park in protest of Shell’s Polar Pioneer arctic drilling rig housed at Seattle’s Harbor Island Terminal 5. In the process of mooring, the activist group dropped concrete blocks and thick steel mooring cables and inadvertently damaged a popular underwater park known as Alki Cove 2. As the barge rose and fell with the tides, the steel mooring cables swept the area underneath causing additional collateral damage to the marine environment as well as endangering recreational divers. Today, the Global Underwater Explorers (GUE) Seattle cleanup project was successfully completed and all concrete blocks and the steel mooring cables were recovered and properly disposed of.

We would like to sincerely thank Royal Dutch Shell, Foss Maritime, and John Sellers (the operator of the Solar Pioneer), for financially contributing to the cleanup effort and future restoration work; Laura James for her assistance in video documentation; and Global Diving & Salvage for their skillful work in removing the debris without causing any additional environmental damage.

We should note what this statement is saying. It is saying that the enviro-wackos used the concrete and metal to anchor their barge destroying the underwater park. But also note that when the enviro-wackos left the area they just cut their lines and LEFT all that garbage on the seabed!

Just like liberal rallies on dry land that end up leaving tons of garbage all over the place, these enviro-wackos had no qualms about leaving their ropes, cables, concrete, metal and other garbage behind when they left the Seattle coastline.