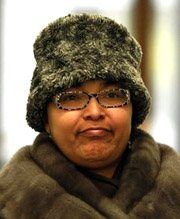 So, a Chicago suburb has a woman who was fortunate enough to become a Cook County judge even though she has severe mental problems… and by severe I mean besides being a black power-pushing, halfwitted Democrat. I mean she was actually diagnosed as a mental case and suspended from the bench because of it. But typical to Chicago, now this nutcase expects to get her job back. Because raaaaacism, I suppose.

The nutcase in question is one Cynthia Brim[1], 55, who was a traffic court judge at the Markham courthouse. In 2012 she went off her nut and began ranting from the bench. Ultimately she was diagnosed with a mental disorder, proscribed a drug regimen to keep her ranting to a minimum and then suspended from the bench.

She even had battery charges filed against her when she went crazy in the court room in 2012.

She even admitted that for 15 years she refused to get mental health help knowing she had something going wrong. And during that whole time she was a sitting judge, too.

But now she claims that because she is on her meds, she should be allowed back on the job.

Just what we need. A woman who is mentally unstable and could go off the deep end at any given minute acting as a judge of we, the people!

Naturally, she has continued to collect her taxpayer funded $182,000 salary since 2012 despite that she hasn’t been doing her job on the bench.

And you know what? This is Chicagoland. She’ll probably be allowed to resume her position despite that she is batshit crazy. Why? Because: raaaaaacism.

Meanwhile she’ll be lording over the regular people and claiming her superiority despite he mental illness.