Ted Stevens: The Left’s Original Blueprint on How to Destroy an Elected Republican 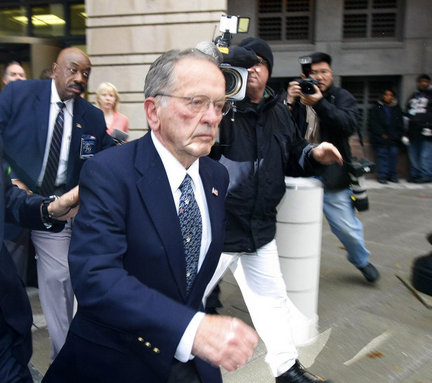 [1]It has been almost five years since former Alaska Republican Senator Ted Stevens tragically died in a plane crash, and over six years since he left the Senate in humiliation. The left viciously targeted him when he was 84, abusing the legal system using classic Alinsky tactics until Stevens’ name and career were utterly destroyed.

Unable to beat Republicans at the ballot box as often as they want, the left now selectively targets Republicans who are less likely to be able to defend themselves, frequently using the Democrat dominated legal system to tie them up in court for years, destroy them financially and tarnish their reputations. Stevens came from a sparsely populated rural state, and so was an easy target not having the support of a strong conservative news source or powerful local conservative organizations. His takedown, along with that of Tom DeLay[2], have become prototypes on how to crush top influential Republicans using the legal system. Since the witch hunts against them, the left has copied that method to go after Dinesh D’Souza[3], Bob McDonnell[4], Sheriff Joe Arpaio[5] and Rick Perry[6] to name a few.

Contrary to the unethical perception that was created about him, Stevens came from an impressive, upstanding background. He flew planes in the Air Force during World War II, flying behind enemy lines. He graduated from Harvard Law School and practiced Western land and water use law. He tragically lost his first wife in an airplane crash. He became the U.S. Attorney for Fairbanks, then worked as an attorney for the Department of the Interior, where he was instrumental in getting Alaska admitted as a state. He became a U.S. Senator from Alaska in late 1968.

Stevens was justifiably criticized for the “Bridge to Nowhere,” a massive pork expenditure he slipped into a bill in 2007 to funnel $3.5 million to help build an airport on a remote Alaskan island. Only 100 residents lived there. Of course, there are few Republicans in Congress who do not sneak pork into bills; even former Rep. Ron Paul (Texas), who was one of the biggest fiscal hawks in Congress, engaged in the practice.

Stevens was a longtime proponent of logging, which angered the left, although he took less conservative positions on global warming and abortion. His lifetime rating from the American Conservative Union was only a paltry 64 percent. Nevertheless, the left saw him as a Republican threat, and pounced on an opportunity to take him out.

In 2008, partisan Democrat career prosecutors at the DOJ convinced a jury to indict a ham sandwich -er, Stevens for supposedly failing to list on Senate disclosure forms some goods and services he received for improvements made to his home in Girdwood, Alaska. He was billed $150,000 by a contractor for the work in 2002, and he paid it in full. DOJ prosecutors claimed the improvements were really worth $250,000, and that he had improperly failed to disclose the additional $100,000. The prosecutors interviewed the foreman on the job, who stated he believed the total work was only worth $80,000. Incredibly, the prosecutors failed to turn this exculpatory information over to Stevens and his defense attorneys.

Although the prosecution was initiated while President Bush was still in office, it was driven[7] by partisan Democrat career prosecutors. Lead prosecutor Brenda Morris[8] has a history of targeting prominent conservatives, including Jack Abramoff[9] and Scooter Libby[10]. Clarice Feldman, a former prosecutor in the DOJ’s criminal division, has written extensively[11] about the targeting by Morris and the DOJ.

The federal judge who decided the case, Emmet G. Sullivan, was appointed to the bench by Bill Clinton, but found the prosecution’s behavior so reprehensible he ultimately threw the case out in early 2009. The New York Times reported[12] that Judge Sullivan, “speaking in a slow and deliberate manner that failed to conceal his anger, said that in 25 years on the bench, he had ‘never seen mishandling and misconduct like what I have seen’ by the Justice Department prosecutors who tried the Stevens case,” repeatedly refusing to turn over documents to the defense. “Again and again, both during and after the trial in this case, the government was caught making false representations and not meeting its discovery obligations,” he said. Stevens’ defense team had this to add about the partisan prosecutors, “They abandoned all decency and sound judgment when they indicted and prosecuted an 84-year old man who served his country in World War II combat, and who served with distinction for 40 years in the U.S. Senate.”

Judge Sullivan named a prominent Washington attorney to investigate six of the prosecutors and determine whether they should be criminally prosecuted. Special Counsel Henry F. Schuelke performed the investigation and issued a 514-page report which found[13] that “Justice Department prosecutors never conducted a comprehensive review of evidence favorable to the Alaska Republican and failed to disclose to defense attorneys notes of witness interviews containing significant information.” Schuelke’s investigation involved examining over 128,000 pages of documents – indicating the mind-boggling depths prosecutors stooped to in order to try and convict Stevens, a horrendous abuse of taxpayers’ money.

U.S. District Judge Orlando Garcia, who ruled against Morris in another case, has said about her, “This is a prosecutor who needs to be removed, and I would hope the attorney general utilizes the same test of integrity as he did in the Stevens case.”

Unfortunately, nothing happened to Morris, she was found[14] to only have exercised poor judgment, which is not the same as misconduct. Most likely, she “knew where the bones were buried” and no one dared to go after her. Two prosecutors under her were suspended[15], probably low-hanging fruit, easy fall guys, but they were not fired.

Sadly for Stevens, his legacy is forever tarnished; most people outside of Washington, D.C., and Alaska remember him primarily for the criminal prosecution and his subsequent embarrassing election loss. His targeting remains one of the most vicious, comprehensive Alinskyite attacks using the legal system, which must be reformed to stop these abuses. The left shows no sign of slowing down and any prominent conservative or Republican is at risk.