While Mayor Richard “King” Daley goes about his important work of destroying Chicagoan’s 2nd Amendment Rights, a terror supporting Islamist organization is again coming to the Windy City to spread its message of jihad and raise money for the cause.

Hizb ut-Tahrir America, a group committed to a world-wide caliphate by which to oppress the world and destroy freedom and liberty, is bringing its newest outrage to Chicago for the second year in a row. The terror supporting group’s second conference, titled “Emerging World Order: How the Khilafah Will Shape the World[1],” is scheduled to be held on July 11 at the Chicago Marriott Oak Brook.

While Daley might be happy that terror supporters are setting up shop in the city he is attempting to disarm, not everyone thinks this jihadi conference is a good idea.

“The bottom line here,” he said, “is that we are witnessing the emergence and the expansion of a jihadist recruitment factory in our midst, openly calling for jihad and for the establishment of a caliphate instead of many governments… and in its last stage to what they call jihadism against America and its allies, that is, technically speaking, terrorism and massacre.” 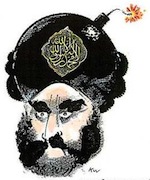 For those that might have forgotten, Hizb ut-Tahrir’s 2009 conference was titled, “Fall of Capitalism & Rise of Islam.”

The 2009 conference is notable for the fact that the original venue at which the conference was going to be held rescinded its offer of support. A Muslim school in Bridgeview, Ill pulled out of offering its facilities after it was alleged that conference operatives misrepresented themselves to school officials. No details on the dispute were made public, but the conference had to find another place to hold the thing in 2009.

There were also the inevitable protests. The Washington, D.C.-based peace group Responsible for Equality And Liberty (REAL) picketed the jihadi conference and made quite a stir in the media.

I would hope that this year’s conference would raise just as much anti-jihadi fuss as last year’s.