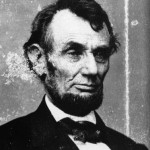 [1]On June 1, 1865, Senator Charles Sumner commented on what is now considered the most famous speech by President Abraham Lincoln. In his eulogy on the slain president, he called it a “monumental act.” He said Lincoln was mistaken that “the world will little note, nor long remember what we say here.” Rather, the Bostonian remarked, “The world noted at once what he said, and will never cease to remember it. The battle itself was less important than the speech.”

Four score and seven years ago our fathers brought forth on this continent, a new nation, conceived in Liberty, and dedicated to the proposition that all men are created equal.

Now we are engaged in a great civil war, testing whether that nation, or any nation so conceived and so dedicated, can long endure. We are met on a great battlefield of that war. We have come to dedicate a portion of that field, as a final resting-place for those who here gave their lives that that nation might live. It is altogether fitting and proper that we should do this.

But, in a larger sense, we can not dedicate – we can not consecrate – we can not hallow – this ground. The brave men, living and dead, who struggled here, have consecrated it, far above our poor power to add or detract. The world will little note, nor long remember what we say here, but it can never forget what they did here. It is for us the living, rather, to be dedicated here to the unfinished work which they who fought here have thus far so nobly advanced. It is rather for us to be here dedicated to the great task remaining before us – that from these honored dead we take increased devotion to that cause for which they gave the last full measure of devotion – that we here highly resolve that these dead shall not have died in vain – that this nation, under God, shall have a new birth of freedom – and that government of the people, by the people, for the people, shall not perish from the earth.

For reasons “progressives” will either deny or refuse to acknowledge, this speech seems especially relevant at this moment in history. Through a combination of political correctness, secular multiculturalism, victimhood and intentionally misinformative rhetoric, America is now as deeply divided as during the 1860s. Ironically, we’ve returned to this place of division due largely to actions taken by a man who sold his candidacy on a message of post-racial reconciliation. Equally ironic is how this man’s major political allies aid and abet the Marxist takeover of America by equating resistance to massive government intrusion into private lives with racism.

In the presidential election of 1860, the Republican Party, led by Abraham Lincoln, campaigned against the expansion of slavery beyond the states where it already existed. The Republican victory in that election resulted in seven southern States declaring their secession from the Union prior to Lincoln’s taking office on March 4, 1861. It’s important here to note that secession was led and participated in by Democrats (read: “progressives”) who insisted on maintaining slavery as a legal American institution.

In September 1862, Republican Abraham Lincoln’s Emancipation Proclamation made ending slavery in the South a war goal. Confederate commander Robert E. Lee won battles in the east, but in 1863 his northward advance was turned back after the Battle of Gettysburg. Confederate resistance collapsed after Lee surrendered to Grant at the Appomattox Court House on April 9, 1865.

Following the Civil War black leaders made substantial progress in establishing representation in the Republican Party. The first 100 black Congressmen elected to office were all southern Republicans. After Democrats (read: “progressives”) passed Jim Crow laws, poll taxes, literacy tests, and founded the KKK to intimidate and exclude blacks from public life, there wasn’t a single black elected to Congress for 75 years.

Besides excluding blacks from equal participation in public life, Democratic (read: “progressive”) white society also kept blacks in a position of economic subservience. When blacks fled the segregated south to live and work in the north, they were denied employment unless they agreed to join organized labor unions. In order to join a union, being a registered Democrat (read: “progressive”) was a requirement. The choice offered to blacks fleeing the south for employment in the “liberal” north was: become a Democrat (read: “progressive”) or you and your family will be left to starve in the streets. This was especially true during the FDR years.

Ever since black separatist Muslims assassinated Republican Christian Martin Luther King Jr. and LBJ hijacked the Civil Rights movement in the 1960s, Democrats (read: “progressives”) have lied to American blacks. They’ve falsely accused Republicans of being the oppressors of the black community.

History shows us that, unlike the Civil Rights legislation passed following the Civil War, which Democrats (read: “progressives”) fought, the 1960s Civil Rights legislation passed with significant Republican support. In fact, it never would have come to a vote in the Senate without the efforts of Republican Senator Everett Dirksen, who broke the Democratic (read: “progressive”) filibuster.

Upon review, the cities and states with the highest percentage of unemployment and the largest budget deficits, are all run by Democrats (read: “progressives”). Cities and states with the highest taxes and biggest spending are the most regressive places to live in America. Many of them are either already bankrupt or are teetering on the brink of bankruptcy. Impoverished blacks have been voting for Democrats (read: “progressives”) for the past fifty years are still poor. This should tell all Americans exactly what they need to know about “progressives” and their policies.

For the second time in history, Democrats (read: “progressives”), for their own personal and political gain, are doing everything in their power to divide America along racial lines. They’ve drawn the battle lines and are now openly and arrogantly daring their opposition to stop full implementation of the “progressive” agenda. “progressives” continue to lie, cheat, steal, and manipulate the masses in order to slake their unquenchable thirst for unrestrained power.

Once a cracker, always a cracker.

I pray to Almighty God that another Gettysburg Address will never become necessary. Should such an occasion again arise, as before, the responsibility will rest squarely upon the shoulders of “progressives”.