Normally, the National Enquirer is not the most reliable publication in the world. However, they have been all over the John Edwards/Rielle Hunter story to such an extent that they obviously have an inside source. So, when I saw a story like this on the front of the Enquirer[1], it was a gimmie that I was going to pick it up and write about it: 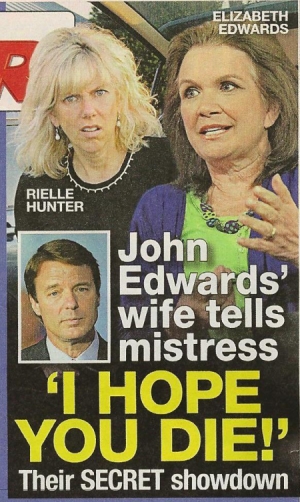 Incidentally, the “angry WTH” look on Rielle Hunter’s face there is absolutely priceless.

But, back to the story — such as it is. You may be wondering, “Gee, John, even if this is probably true, why are you bothering to cover it?”

Well, nobody else is and how often do you have a former Vice-Presidential candidate, his deathly ill, extremely vengeful wife, and his mistress, whom Edwards appears to be openly grooming as a replacement wife, all involved in a confrontation?

It’s like a train hitting a bus full of orphans and knocking the whole mess right into the lion cage at the zoo five minutes before feeding time. It’s too awful to watch — but, you can’t look away either.

Here are some of the horrific details from the Enquirer that if I had to bet, were probably some sort of rough approximation of the truth:

“When Elizabeth found out Rielle had shown up in North Carolina to look at houses, she went ballistic!” a close source told THE ENQUIRER. “She demanded that John give her Rielle’s cell phone number. John was in the room when Elizabeth called Rielle and screamed into the phone, “How dare you move here?”

Without giving Rielle a chance to respond, Elizabeth continued her tirade, shouting, ‘Leave my family alone!’ Then, clearly beside herself with rage, she blurted out, ‘I hope you die!’ and slammed down the phone.'”

On the other end of the line, Rielle — who’s been living with a friend in New Jersey – recoiled in horror, said the source. “Elizabeth didn’t have to identify herself for Rielle to know who it was. It was a confrontation that Rielle expected would eventually take place, but it still caught her off guard,” the source said.

And Elizabeth’s hostility made Rielle only more determined to raise her 20-month-old daughter Frances near John, said the source.

“Rielle said, ‘She better come to grips with the fact that John is going to be in our daughter’s life whether she likes it or not!'” said the source.

“She also said, ‘Elizabeth can yell and scream at me all she wants, but her anger is clear misdirected. John knew what he was doing when we got pregnant. Elizabeth needs to face facts.'”

After reading that, you have to figure that Rielle Hunter is the one feeding this info to the Enquirer.

Can you imagine being in this situation? John Edwards is living with Elizabeth Edwards, who is furious with him and goes online and TV to vent. His mistress has moved in nearby — and for all we know, she may be angry with him, too. He has kids with Elizabeth. He has a kid with the mistress. So, he has obligations to both women. Meanwhile, both women quite naturally hate each other and when they have conflicts, Edwards knows it will probably end up in the Enquirer.

If there was a Guinness World Record for the biggest mess created by an affair, this would have to be one of the contenders for the title.