There’s a new Dem front-runner… Feel the Bern: the rise of Socialist Sanders

Here we go with the revolutionary talk again.[1] The Left just never tires of it, do they? Bernie Sanders is basically calling for a revolt in America to give power back to the people. Where have I heard that before? Oh yeah! Every black hearted, power grabbing despot in history has said something very similar. Socialist Sanders blames all our ills on the wealthy and wants mobs of Americans to take them down. God help us if we do. This man now leads Clinton in the polls and the young seem to flock to this 73 year-old communist. It’s mind-boggling in its implications. Sanders is the last thing this country needs and if elected, he will be the last thing indeed. 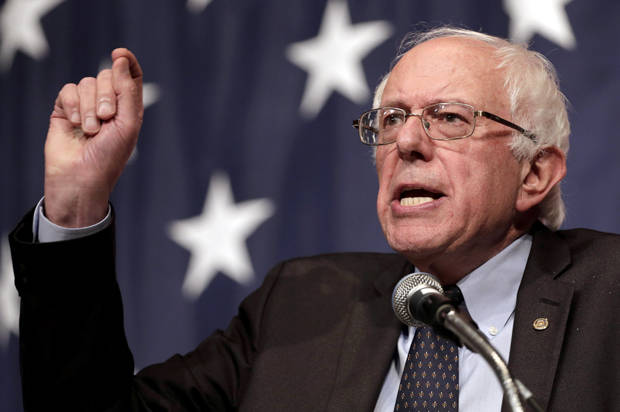 “And now let me tell you something that no other candidate for president will tell you. And that is no matter who is elected to be president, that person will not be able to address the enormous problems facing the working families of our country. They will not be able to succeed because the power of corporate America, the power of Wall Street, the power of campaign donors, is so great that no president alone can stand up to them. That is the truth. People may be uncomfortable about hearing it, but that is the reality.”

Judging by the low murmurs and restless bodies witnessed in the seconds before the senator from Vermont reached his next applause line, this sentiment did indeed leave the patrons of the Wing Ding Dinner a bit unsettled. The Iowa Democrats inside the Surf Ballroom—a sweaty music hall where ceiling fans spun to no effect at the top of a barrel roof, and where Buddy Holly played his final show before he chartered the private plane that killed him in 1959—had just finished cheering their heads off for Hillary Clinton’s platitudes, and now regarded the man onstage with a mixture of confusion and annoyance.

The warning didn’t suit the festive mood. Hillary had satisfied their need for a savior, and now this relentless 73-year-old, hunched forward and gripping both sides of the podium as he bellowed in a strong Brooklyn accent, was insisting that the situation in America might require more than manufactured optimism—it might require actual political revolution.

In fact, the Wing Ding audience represented Sanders’ first lukewarm crowd in some time. Since announcing his candidacy in an email to supporters in late April—a candidacy that was first dismissed as a fringe protest movement, eventually seen as a minor force that might push Hillary to the left, and is now being recognized as a legitimate threat to the front-runner—Sanders has gathered momentum at a rate that is either impressive or alarming, depending on your perspective.

His events have drawn the primary season’s largest turnouts, and he’s banked donations from more Americans—400,000 and counting—than any other candidate. Just days before coming to Iowa, a poll showed him leading Clinton in the critical New Hampshire race for the first time, and less than a month later, he’d take his first lead in Iowa. Meanwhile, national polls indicate that he’s cut Clinton’s national lead in half since June—a trajectory that looks very similar to Barack Obama’s rise in 2008.

This surprising grass-roots success, without the aid of a super PAC or corporate millions, stems from a very simple message: Wealth inequality is destroying the American middle class and leading to increased job loss and poverty.

He has a few favorite stats he likes to deploy to illustrate the scope of the problem, starting with the fact that in America, the top one-tenth of 1 percent owns almost as much wealth as the bottom 90 percent. He hammers this message home as his rabid crowds rage along: One family, the Waltons, owns more wealth than the bottom 40 percent; the 14 wealthiest individuals have added $156 billion to their fortunes in the past two years, which is more than the combined assets of the bottom 130 million Americans; 56 percent of all new income goes to the top 1 percent; the Koch brothers, as a result of the Citizens United decision, will spend more money on the 2016 election than either Republicans or Democrats.

To Sanders, almost every other problem plaguing the country is related to this “rigged economy,” including a minimum wage of $7.25, the loss of manufacturing jobs, childhood poverty, crumbling infrastructure, college debt, racial injustice, high unemployment and incarceration rates, the death of trade unions, attacks on social security, a broken electoral system, destabilizing wars, and even the destructive march of climate change.

His platform is built on redressing this flawed system, and the ideas have resonated with a disenchanted progressive base, for whom the discovery of the two-term senator, eight-term House representative, and former mayor came on like a revelation—here was a man who had been preaching the same sermon for almost 40 years, voting with his conscience, and still, somehow, winning elections.

His résumé precedes him—Sanders voted against the first Iraq War, against the Patriot Act, and against the second Iraq War. He opposed NAFTA before it was signed, and he opposed the repeal of the Glass-Steagall Act that kept commercial and investment banks separate, and may have prevented the financial crisis. He wasn’t silent in his opposition—on YouTube, you can watch Sanders predict exactly what would happen in the aftermath of Iraq in a speech from 2002, or see him berate Alan Greenspan for the economic ideology that would lead to the recession, or witness his eight-hour filibuster after Obama extended the Bush tax cuts in 2010.

It’s a record that distinguishes Sanders from most of his Democratic colleagues, including Hillary Clinton, who voted for both the Iraq War and the Patriot Act, accepts corporate money from super PACs, supported the trade agreements, and opposed gay marriage until 2013. To the hordes of progressives flocking to his side, Sanders is a rare phenomenon—a politician who walks the walk.

“This is it,” reads a typical post on Sanders’ independently run Reddit page, which now exceeds 100,000 subscribers. “I’ve been cynical and adverse to the American political process for years. I am registering to vote for the first time, for the only man who has ever given me hope in America and American politics.”

When he finished his address at the Wing Ding, Sanders gathered a stack of loose papers from the podium—he writes his own speeches on yellow legal pads and keeps his notes in a manila folder—and left the stage to polite applause. His warning made very little impact in a room dominated by Clinton supporters, and there was nothing to do but move on to the next stop.

Four days later, MSNBC’s Chris Hayes posted the video of that warning on Facebook. This time, people paid attention—in less than 24 hours, it had accumulated more than 3 million views.

The supposed price tag of what Sanders is proposing is somewhere in the neighborhood of a whopping $18 trillion. But the Marxists are twisting the message to make it seem as though socialism is free and easy… that it is the ultimate cure for all of the US’ ills. You know, sort of like euthanasia. Sanders’ campaign speaks of “spreading out a cost currently borne by a limited number of people to all taxpayers.” Uh, yeah. The phrase “spreading out a cost” sounds like sharing. This actually means forcing other people to pay for what others want to buy. This is done through the federal government dictating what you should buy with your hard-earned dollars, then taking those dollars from you. Sanders also wants ‘free college’ for all – free in the sense that all of us pay for it. Sanders said, “…right now, it’s paid for by students and their families, while under Sanders’ plan we’d all pay for it in the same way we all pay for parks or the military or food safety.” This is the kind of thinking you get from Bernie Sanders. And this is why the Democrats want him and think he is dreamy. Sanders might indeed represent the last chance for progressive politics in America. We can only hope and pray that is true.