Things Are About to Get REALLY Bad for Hillary

It would be the height of irony[1] if Hillary Clinton became the Democratic nominee and then was indicted for corruption and national security violations. Truth in advertising as a charged criminal would be running for president of the United States. There is no time limit on this investigation, so it could very well come to a head right about the time of the presidential election this year. “It does give pause to Democrats who are concerned that there may be another shoe to drop down the road,” said Andrew Smith, a political science professor at the University of New Hampshire. You betcha it does. Things are heating up for the Hildabeast and look to get really bad for her from here on out. 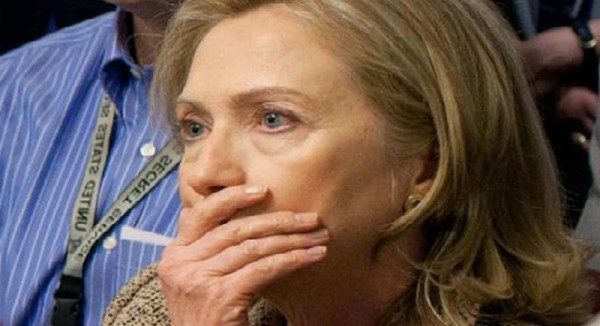 Six months after it began, the federal investigation into Hillary Clinton’s private email server shows no signs of slowing down.

Former FBI officials said the length of the probe is not unusual, and speculated that a decision on whether to file charges against Clinton or her top aides could come later this year, during the heat of the general election campaign.

“I don’t know that there’s any magical cutoff date,” said Ron Hosko, the FBI’s former assistant director of the criminal investigative division and a 30-year veteran of the bureau.

There is already more than enough evidence to nail Hillary Clinton. They are dragging this out to dot their i’s and cross their t’s… to bring down someone like Clinton, you have to have all your ducks in a row. Hillary’s foot soldiers, Cheryl Mills, Huma Abedin or Jake Sullivan, have the most to worry about here as they are on the front line. Hillary will in the end feed them to the dogs if she thinks it will save her worthless hide. They cut and pasted security clearance info and headers in those emails and Hillary has perjured herself many times over on all this. She deserves to go away forever over this and Benghazi, not to mention a whole list of other things she’s never had to answer for. Someone under this type of investigation should not be allowed to run for president – especially when there is overwhelming evidence they are guilty. She should have had her security clearance yanked and she should have been forced to recuse herself from the race. Yet here we are.