The Tide Is Turning On Russian Probe And NOT The Way Democrats Were Hoping For! [VIDEO] 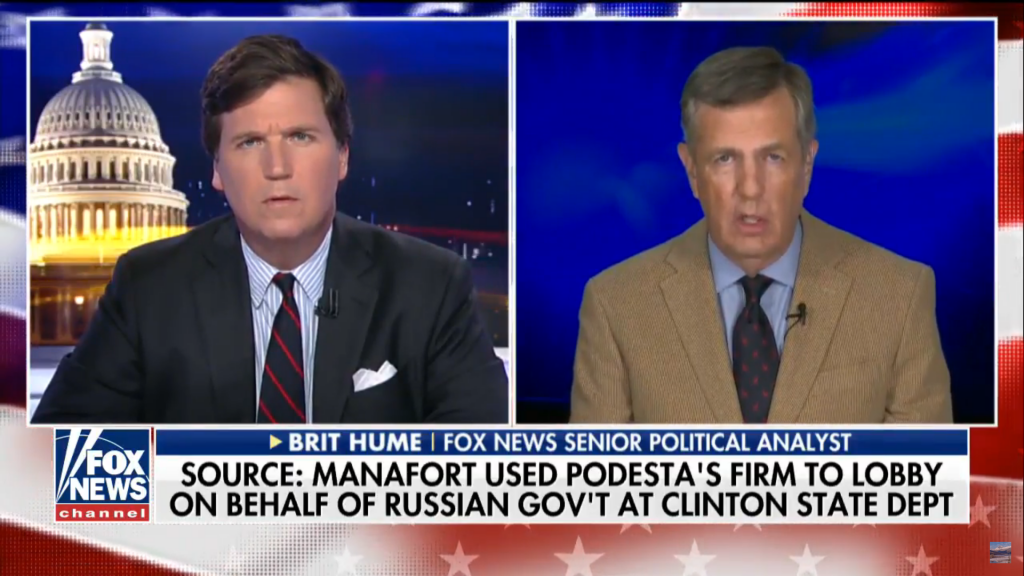 Hume said that the “tide may now be turning” on the probe which was meant to focus on possible collusion between Russia and the Trump 2016 campaign. Now, the probe isn’t just looking at Trump. As more facts pour in it looks less like Russia had anything to do with Trump and a lot more like the Russians had a lot to do with Hillary.

Hume told Tucker that there is now a suggestion of collusion between Paul Manafort and a group associated with John Podesta “on behalf of Russian interests” and that the Podesta people, brothers Tony and John are “at the heart of the Democratic Party,” as well as the Clintons. He also pointed out that the fact that these associations have gone on for so long without any journalistic interest raises more questions.

“…how could it be that all these journalists working for other news organizations have been chasing this story, these many months, and never run across any of this? Remarkable indeed.”

Carlson said that Hume has “been in journalism for longer than [he] has been alive,” when he asked him how it was possible that nobody noticed the money that was going through the Podestas, stating that since the Podesta group has 75 employees in Washington, D.C., it’s remarkable that it had never been brought up to any journalists over the last 11 months.

Hume responded that it’s “pretty striking,” but said that it’s even more noteworthy that it’s gone from Russian influence on Trump, to a “broad gazed effort to determine the extend and depth of Russian efforts” to influence policy and now we know that means policy created by Democrats for the last several years.

Earlier this week we reported that in 2010, Bill Clinton had received $500,000 to speak in Moscow from a bank associated with the Kremlin. This happened at the same time that Hillary, then Secretary of State, was negotiating the Uranium One deal with Russian energy companies. A businessman in the employ of the FBI knew that this was going on, but he was prevented from speaking to Congress about the shady dealings and Obama eventually approved the deal[2].

Here’s thirteen minutes of last night’s Tucker Carlson, but if you want to skip right to the part with Brit Hume, I’ve already set it forward to 6:41.