For a few years now I have been seeing stories about how the Girl Scouts are pushing abortion harder and harder. At first the references to the organization’s campaign in favor of abortion was disparate and isolated. But now that they are pushing for Texas candidate Wendy Davis, it’s finally all too much. It is time to stop supporting the Girl Scouts. 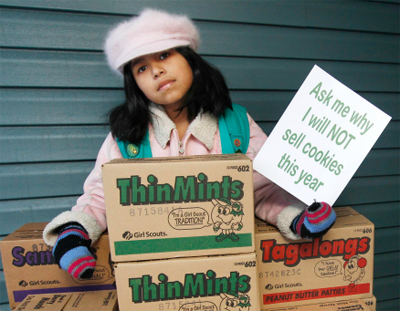 For me, in years past I maintained that you shouldn’t hold the national organization to task for what local groups did. But as the connections mounted year in and year out, it all became too much to ignore. Now, despite what the national organization claims, it is simply impossible to believe that the GS doesn’t materially support abortion quite despite what they claim as an official policy.

Several national pro-life groups have banded together this year to officially boycott the Girl Scouts over its support of abortion, most especially its ties to the baby-killing group Planned Parenthood.

Granted the Girl Scouts claim that their official position on abortion is to have no position[1] on abortion. But the GS’s actions speak to the opposite.

But to have “no position” would mean to avoid connecting with it pro or con in order to avoid a defacto position through support, yet the GS is thoroughly connected to Planned Parenthood despite the “no position” claim.

As Steven Ertelt writes[3], the GS has a long and growing trail of connections to Planned Parenthood and other abortion groups.

Fresh on the heels of Girl Scouts USA (GSUSA) sharing a recommendation for Wendy Davis as a 2013 Woman of the Year[4] via their official Twitter account, the organization suggests HHS Secretary Kathleen Sebelius as a woman “with courage, confidence, and character.”[5]

The Girl Scouts have been criticized for their involvement[7] in the May, 2013 Women Deliver Conference[8], an international event that included “safe and legal abortion[9]” among its overarching themes. It documents its role in the planning[10] and facilitating[11] of the December, 2012 Bali Global Youth Forum and the outcome declaration[12], which demands youth access to abortion.

The ties between the two groups have been questioned ever since former Girl Scouts CEO Kathy Cloninger admitted[13] on NBC’s The Today Show: “We partner with many organizations. We have relationships with…Planned Parenthood organizations across the country.” See the video here[14].

For fourteen year,s the Girls Scouts in Waco, TX co-sponsored a sex ed conference with Planned Parenthood[18]. “It’s Perfectly Normal” a book written by a Planned Parenthood executive was given to all children in attendance says abortion can be “a positive experience.” And in January 2012, Girl Scouts employee Renise Rodriguez wore a “Pray to End Abortion” t-shirt during off-duty visit to her Tucson Girl Scout office and was ordered to her to turn the shirt inside out[19] or leave.

This is all a bit much for a group that has no ties to Planned Parenthood or one that doesn’t push abortion, isn’t it?

So, a group of pro-life advocates have launched a petition to let the Scouts know that they are on the wrong path.

The coalition of pro-life organizations that are boycotting sales of the cookies is: LifeNews, American Life League, the Pro-Life Action League, the Radiance Foundation, blogger Jill Stanek, the National Black Pro-Life Union, the Issues4Life Foundation, and Life Coalition International.

Finally, do the Girl Scouts have a right to push abortion on their little girls if they want to? Sure they do. And we have a corresponding right to protest their actions, boycott their fundraising, and attempt to persuade them to stop pushing abortion.

So, join us in pressuring the GS into actually fulfilling its “no opinion” policy and eschewing all connections to Planned Parenthood.