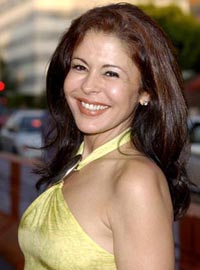 Remember, liberals–especially effusive Hollywood folk–are smarter, more loving, more grown up that you knuckle dragging conservatives, and they care more about people, too. And if you don’t agree… they’ll fire you with prejudice. Because: tolerance. That is what happened to one actress in Hollywood that dared support a conservative candidate.

Longtime denizen of Hollywood, actress Maria Conchita Alonso, was fired from an acting job in California because she dared to appear in an ad for Republican candidate for governor Tim Donnelly.

Donnelly, a current California assemblyman[1], is now running for governor[2] to replace the extremely left-wing Governor Jerry “Moonbeam” Brown, the octogenarian liberal who is driving some of the final nails into California’s coffin.

Alonso appeared in one of Donnelly’s TV ads, a pretty amusing one, too.

But now she’s lost a job for her support of Donnelly. CBS San Francisco reports[3] that Alonso was fired from an acting job at the Brava Theater Center in San Francisco. The actress was to appear in a stage presentation of the “Vagina Monologues.”

“We really cannot have her in the show, unfortunately,” Eliana Lopez, wife of San Francisco Sheriff Ross Mirkarimi and the producer of the show said.

So, the more tolerant, more caring, more open liberals fired someone merely because she has a different political opinion than they.

This isn’t the first time that Alonso was in the news for voicing a conservative-leaning opinion. Back in 2010, the actress slammed silly, half-witted actor Sean Penn[4] for giving constant support of Venezuelan dictator Hugo Chavez.