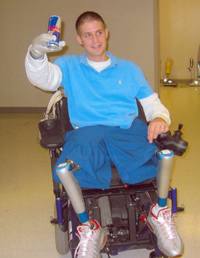 Senior Airman, Brian Kolfage Jr., is the most severely wounded Airman in US history–a triple amputee. Now the Veterans Admin is trying to force him to “pay back” $4,825 it claims he was “over paid” in benefits.

As reported by John DeMayo of Freedom Outpost[1], the Veterans Administration Debt Management Center informed Kolfage that he would be back charged for the $4,825. According to the VA, they had been overpaying Airman Kolfage for several years and now they want their money back.

DeMayor has the whole story of this cockup, but needless to say, Senior Airman Brian Kolfage is an American hero. He is a triple-amputee veteran of the War in Iraq who has surpassed all odds and made the most incredible recovery of any veteran to ever survive his injuries. He is a patriot–the kind of man you want your son to grow up to be.

But he seems to have had quite enough of this Obama character! Kolfage recently wrote an open letter to Obama that just puts this whelp of a President in his place.

So, here it is courtesy of Joe the Plumber[2]:

I nearly died in a war that you and most of your colleagues supported overwhelmingly, including the two presidents who came before you. Many citizens may not agree with waging war in Iraq to free the oppressed Iraqi citizens, but it’s something that warriors like myself have zero control over. I joined to serve my country and to better my life. I’ve seen things that you could never imagine, and they have made me the person I am today.

Mr. Obama, even though we share extreme opposite views, we have one thing in common, we both attended school in Hawaii. However, that’s where the similarities end. You see, as you attended your exclusive, private school, I would ride my bike to Kaimuki High school in one of the roughest areas in Hawaii every morning and would ride past Punahou, the exclusive private school you attended. I would notice the Bentleys, Maserati’s, and fancy foreign cars that all the kids were dropped off in; wow it must have been extremely rough in Hawaii living that life, right? I could only imagine what it was like to have that kind of money. Fortunately for you, not many people are aware of the school and the upper class citizens who attended it. The tuition to attend your exclusive, private school was more than it cost me to obtain a Bachelor’s degree in Architecture from the University of Arizona. You talk a big game when it comes to financial inequality, yet I’m quite sure you have no idea what it’s truly like to have sacrifice. You were one of the elitist children in Hawaii.

After High School, we each chose very different paths. You were able to attend Ivy League schools, and I sought out a military career to in hopes of earning a degree. What we have in life as children usually sets the tone for what we will face later in life that will make us successful. I worked to get where I am today, and YOU WERE HANDED IT….Mr. Inequality.

I volunteered to go to Iraq on both of my deployments, and the second time I begged to go even after I wasn’t selected, which ultimately got me placed on the team where I would lose both legs and my dominant arm. I’ve never asked myself was losing 3 limbs in a war worth it, even though many Americans were against it.

I am frequently reminded of the many young Iraqi children who would beg me for water, food, and toys while I was stationed in Iraq. Children, who in all aspects made the poorest of poor American children look rich. You have no idea what it really means to be poor. It’s laughable that you, who would have no idea what it means to be poor would so frequently play the inequality card.

While I was in Iraq, our mission was to liberate the Iraqi citizens from a tyrant and that’s what we did. Never forget, it was your people who sent us there, like the Clintons, John Kerry, Nancy Pelosi & Carl Levin. However, since the day you busted onto the scene you’ve been talking about ending the war and pulling the troops out, not understanding the blood sweat and tears that so many Americans and Iraqi’sinvested. And with complete disregard for every life sacrificed, every limb lost, and every broken family, you bailed on our mission to pursue an agenda that was completely centered on your re-election in 2012. If you didn’t bail on Iraq you were worried that you may not get re-elected and that’s a fact. Just before elections on Oct 11, 2012 you said “Al Qaeda is on the run and Osama bin Laden is dead.” Look at Iraq now, they are in shambles and the Al Qaeda flag is flying freely. Clearly, you’re unfit for duty as a Commander in Chief. You put your own agenda ahead of America’s agenda, and now you have single handedly ruined and destroyed nearly everything we gained in Iraq. It clearly means nothing to you, because the only thing that you’ve personally invested in that country was a promise to bail on them. However, people like me gave limbs, friends have died, and we’ve watched families destroyed by war’s aftermath.

I’m not placing blame on you for the war, I’m placing blame on you for destroying what we’ve worked so hard to build. You’re not a leader, you’re a community organizer. A leader would have stood up regardless of the situation and put America’s agenda first and that is ensuring a secure Iraq even after 10 years of war. But, you placed Barack first, just as Robert Gates confirmed in his new book. I can’thelp but think of those poor kids who I gave water and toys to 11 years ago. They’re probably 15 or 16 years old now, and I can only imagine what it’s like for them to have their nation being torn apart yet again; all because of your poor leadership qualities. Regardless of why we went to Iraq, its water under the bridge. We went there, we waged war, and we not only owed it to our KIA’s but we owed it to the citizens of Iraq. We invaded their country and turned it upside down, and you bailed on them. You bailed on our soldiers and you’ve wasted every death and every limb, it’s all for nothing. And to make matters worse you blame others for your failures.

You’re just another elitist rich thug who’s pretended to live the rough life growing up in the inner-city. You’re only worried about your own agenda and furthering your party instead of taking care of Americans. Your inability to be a leader at some of the most critical points has caused both of our wars to fail. You’ve been a joke to most of our veteran community and we have no faith in your ability to lead.