The Donald hits another home run[1] with this election promise – who knew doing the common sense thing would be a hugely popular campaign issue? Trump is proposing abolishing gun free zones on military bases and you know… actually arming the Armed Forces. Go figure. It’s a brilliant move and one Americans have been clamoring for. He’s right when he says it’s an insane political correctness issue. Soldiers should be ready, willing and able to defend themselves and others from our enemies – both foreign and domestic. Trump is also right when he says background checks just plain don’t work. Unless of course your goal is to actively keep ordinary citizens from getting guns and protecting themselves. 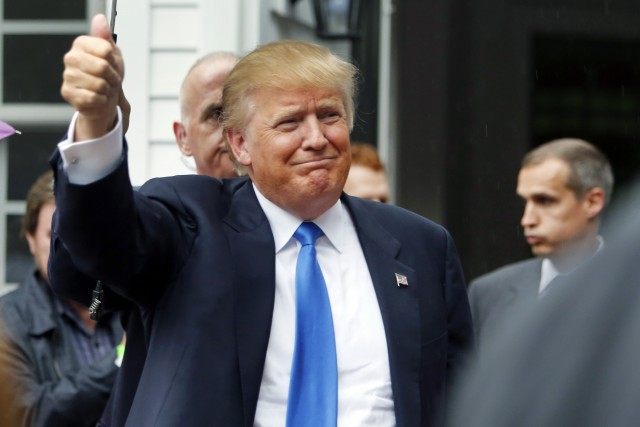 Donald Trump says that if elected president, he will abolish the gun free zones currently imposed on U.S. troops by “[mandating] that soldiers remain armed and on alert at our military bases.”

In an interview with Ammoland[3] he said: “President Clinton never should have passed a ban on soldiers being able to protect themselves on bases. America’s Armed Forces will be armed.”

Trump went on to decry gun free zones on military bases as a product of “political correctness” and said removing those zones “will… [enable soldiers] to defend themselves against terrorists.” He added, “Our brave soldiers should not be at risk because of policy created by civilian leadership.”

They make it more difficult for law abiding citizens to acquire firearms while consistently failing to stop criminals from getting guns. We should re-examine our policy to make sure that these prohibitions do not impede law abiding citizens from exercising their Second Amendment rights

Background checks proved impotent to prevent any of these attackers from carrying out their heinous deeds but served well to make it more difficult for law-abiding citizens to get the guns they need for self-defense.

He may be brash and arrogant, but you can’t help but smile when The Donald descends and tears them a new one. Good times. He’s too wealthy and powerful to be bought and he is not afraid to say what he thinks. It’s refreshing. As I said, I’m still a Cruz gal, but Cruz supports Trump as well. The Leftists and RINOs fear both of them – I feel an alliance coming on. Trump is saying what America is dying to hear… they are literally starving for a leader. They actually see real hope in Trump and I’m all for that. A new slogan is catching fire out there… you’ve been Trumped!