I think Donald Trump is absolutely right[1] about it being a miracle if Hillary Clinton can finish her run for the White House with the email scandal dogging her the way it is. She’s lied far too much and been caught at it too many times for her to survive the rigors of the election trail. David Petraeus was taken down for far, far less and destroyed over it. Hillary may avoid prison because she is such a Liberal icon, but a poll was just conducted that shows 58%, the majority of voters, think she lied and put our national security at risk. She’s now officially damaged goods and Trump or Cruz would beat here handily. 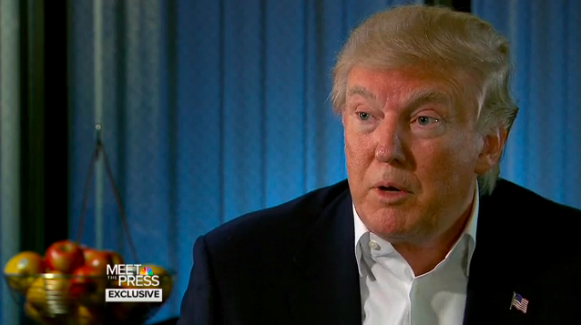 Appearing on NBC’s “Meet the Press,” Donald Trump compared Hillary Clinton’s controversy over her email server to that of former CIA Director David Petraeus[3] who ultimately was forced to resign after it was revealed that he shared classified information with a woman he was having an affair with.

“I think [Clinton] may not be able to run, to be honest, because this whole email thing is a horrible thing,” Trump told Chuck Todd in an interview[4] that aired Sunday morning, saying that it would be a “miracle” if the former secretary of state is able to continue her 2016 presidential campaign.

“General Petraeus, his life has been destroyed. And he did 5 percent of what she did,” Trump said. “So assuming she’s able to run — which would be absolutely, to me, a miracle at this point — I will beat her.”

The real estate tycoon also said he imagined Clinton’s husband, former President Bill Clinton, was “disappointed” that Trump had decided to throw his hat into the ring for the Republican presidential nomination as he is the only candidate who could beat Clinton.

Trump and Todd, despite their tumultuous relationship[6] sat down for the 30-minute interview below.

There is no love lost between Trump and Clinton currently. He’s called her the worst Secretary of State in US history. Only outdone possibly by John Kerry. In Iowa, Trump had three times the followers there that Hillary, Sanders or Bush did. He was mobbed by thousands of adoring fans. Hillary is in real trouble politically – she claims no one is bringing up the email scandal, but that is only because she is suppressing questions and heavily screening who attends her events. Anyone else who asks, she just pretends she doesn’t hear them… much in the way she didn’t seem to hear Trump’s helicopter buzzing her repeatedly in Iowa before it landed. In my opinion, she’s toast, at least I fervently hope so. Too many socialists in the stew out there.