Nice campaign you got there Sanders[1], shame if anything happened to it. Fresh from being booed off the stage at the Net Roots insanity for saying all lives matter… Sanders hired the biggest radical with #BlackLivesMatter he could find to be his press secretary. He caved to the racist mafia and crawled into bed with racists, radicals, Islamists, hate mongers, communists and anarchists. All so he can preside over a country if he is elected that won’t exist any longer. This is a perfect example of what not to do when Sanders was on stage in front of thousands in Seattle. Two #BlackLivesMatter thugs stormed the stage and took the microphone forcibly from him. Sanders slinked off and bowed his head in submission. Evidently he’s cool with mob rule… Trump isn’t and won’t be.

Donald Trump[4] picked a fight with the Black Lives Matter racial-justice movement on Tuesday – telling reporters that Senator Bernie Sanders was ‘weak’ for allowing activists from the group to hijack an event on Saturday.

The protesters stormed a Seattle stage and took Sanders’ microphone, ending the event before it had started.

Trump suggested that he would welcome a physical confrontation with the social justice warriors if he were put in the same position.

‘I don’t know if I’ll do the fighting myself, or if other people will, but that was a disgrace,’ Trump told reporters during a press conference before a Michigan campaign speech.

‘I would never give up my microphone,’ the billionaire White House hopeful added. ‘I thought that was disgusting.’

‘That showed such weakness, the way he was taken away by two young women. The microphone! They just took the whole place over!’

Thousands came to listen to the Vermont senator on Saturday but walked away without hearing a word from him.

‘That will never happen with me,’ Trump said.

Sanders found himself without a microphone after protester Marissa Johnson leapt on stage and took it from him.

‘We’re shutting this event down – now,’ Johnson declared then.

The senator, nominally a Democrat, has described himself as a socialist and says he sympathizes with the movement that grew out of a series of deaths of young black men while in police custody.

‘The chants are growing louder,’ Sanders wrote Sunday on his website. ‘People are angry and they have a right to be angry.’

Sanders responded to the fracas by hiring a new African-American press secretary, Symone Sanders (no relation), a few hours later.

She is linked to civil rights and racial-justice groups and brings with her a Rolodex of contacts inside the Black Lives Matter movement.

You bet people are angry. But these people flocking to Sanders are doubling down on stupid. They put Obama in for two terms and look how bad things got. Now they want a proclaimed socialist so they can finish America off. Burn it down and do a two-step boogie on it. Sanders is a weak, pandering figurehead. Trump may be many things, but weak he is not and he would never stand for such a display of disrespect. True leaders don’t conduct themselves that way. It’s dangerous and invites attacks. We now have a full blown rift in America – a split from law-abiding constitutional conservatives and radical extremists. This election is for the very soul of America and it is a battle for survival in which there may not be a second place. 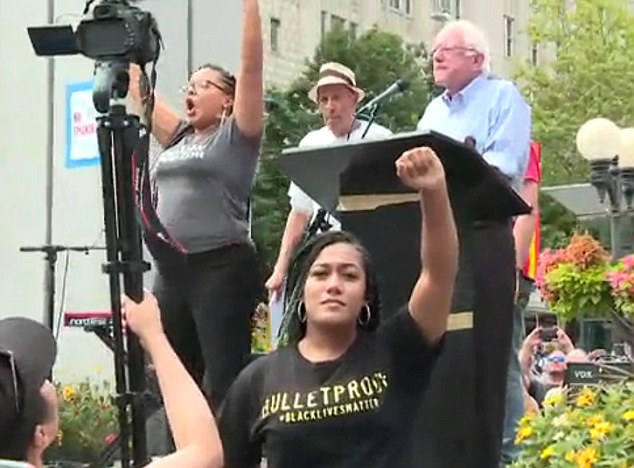 Under siege: Vermont Senator Bernie Sanders never got to speak at his presidential campaign rally in Seattle on Saturday after two ‘Black Lives Matter’ protesters upstaged him.

Sanders (right) stood silently as the activists took his mic (center) and he left the event without speaking .