Trump vs DNC Chair – the battle of the Tweets

I thought this would happen.[1] Yesterday, after I wrote about Tom Perez beating Keith Ellison to become DNC chair, I saw President Trump tweet out: “Congratulations to Thomas Perez, who has just been named Chairman of the DNC. I could not be happier for him, or for the Republican Party!” That was a nice jab… indicating that the GOP would have a field day taking Perez apart. But Perez appointed Ellison as Deputy DNC Chair and feels that doubles their strength against Trump.

So, the crazy will double down now in the party and they will shift even more to the left. When Perez talks about them being Trump’s worst nightmare, I assume he is referring to riots, protests and chaos in the streets. Nice threat there bud. Perez is the face of Obama and Clinton… Ellison is Sander’s boy. Perez is a communist and Ellison is a Marxist Muslim radical. There will definitely be a dance to be had here with these moonbats. 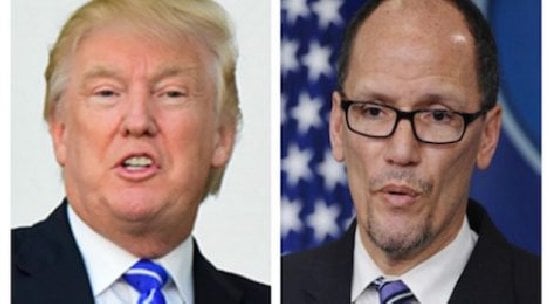 President Trump managed to get a rise out of the new Democratic National Committee chairman Saturday.

Congratulations to Thomas Perez, who has just been named Chairman of the DNC. I could not be happier for him, or for the Republican Party!

Perez, who was considered the establishment Democratic candidate for the position over far-left rival Rep. Keith Ellison, managed to squeak past his primary opponent in a 235-200[4] vote of the committee’s 435 members who cast their ballots.

Trump’s statement that he was pleased for the Perez victory on behalf of the Republican Party is no doubt in reference to the president’s victory over Hillary Clinton — an establishment Democrat.

Perez took the nose-tweak in stride, however, and shoot back:

Call me Tom. And don't get too happy. @keithellison[5] and I, and Democrats united across the country, will be your worst nightmare. https://t.co/fu7WvLofrD[6]

Perez was elected on the second round of voting — he was one vote shy of victory after the first round. His statement that both he and Ellison will be the GOP’s “worst nightmare” referred to the Minnesota congressman’s election as the party’s deputy chair.

Perez had an email scandal similar to Hillary Clinton’s while he was the Secretary of Labor under Obama. He used his private email over 1200 times in a blatant disregard for national security. He also leaked stuff to both the New York Times and Planned Parenthood. Here are 10 facts that you should know about this asshat – from PolitiStick[8]:

Perez was elected on the second round of voting. He was one vote shy of victory after the first round. The final tally was 235 to 200. He didn’t beat Ellison by much. This dynamic duo will go to war with President Trump and the right. But in the battle of Tweets, much like everything else, Trump always wins.