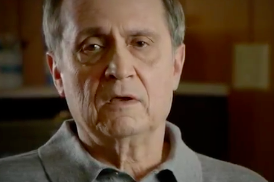 Joe Soptic is featured in a new Obama ad called “understands,” which details (again) how he lost his job when Bain shut down his plant. : However, he goes a step further and blames Romney for his wife’s death. Wow!

When Mitt Romney and Bain closed the plant, I lost my healthcare, and my family lost their healthcare.: : And a short time after that my wife became ill.

I don’t know how long she was sick and I think maybe she didn’t say anything because she knew that we couldn’t afford the insurance, and then one day she became ill and I took her up to the Jackson County Hospital and admitted her for pneumonia and that’s when they found the cancer and by then it was stage four.: : It was, there was nothing they could do for her.

And she passed away in 22 days.

Soptic was also featured in the first salvo of anti-Bain/Romney ads last May[3], but as Business Insider indicates, it was never this personal.

A request for a statement, in response to this ad, was sent to the Romney campaign and Spokesman Ryan Williams had this to say:

President Obama’s allies continue to use discredited and dishonest attacks in a contemptible effort to conceal the administration’s deplorable economic record. After 42 months of unemployment above 8 percent, it is clear that the President and his campaign do not have a rationale for reelection. He focused on health care instead of the economy, he hasn’t been able to pass a budget through Congress, he hasn’t been able to cut the deficit like he promised and he’s done little to change the way Washington works. Mitt Romney has a Plan for a Stronger Middle Class that will jumpstart the economy and bring back millions of jobs.

Mr. Soptic, I’m sorry that your wife passed away, but using her death to score political points is downright disgraceful.

Update: Mr. Soptic’s wife died in 2006. : Romney left Bain in 1999[4]. : Talk about a left-wing hack job. : Alexander Burns of Politico posted about this discrepancy this afternoon and wrote:[5]

In the case of this particularly jarring super PAC ad, it may also be relevant that Soptic’s wife died in 2006, years after the GST factory closed down.

A 2006 story in the Kansas City Star reported the death of Ranae Soptic, a former champion roller skater: Soptic went to the hospital for pneumonia, but doctors found signs of very advanced cancer, and she died two weeks later on June 22.”

I asked Priorities USA strategist Bill Burton to explain the connection between Romney, Bain and a cancer fatality that happened near the end of Romney’s tenure as governor of Massachusetts. The lapse in time between the plant closing and Soptic’s death doesn’t mean the ad is invalid, but it raises questions about the cause and effect relationship here.

We’re illustrating how long it took for communities and individuals to recover from the closing of these businesses, Burton responded. Families and individuals had to find new jobs, new sources of health insurance and a way to make up for the pensions they lost. Mitt Romney has had an enduring impact on the lives of thousands of men and women and for many of them, that impact has been devastating.

Talk about a stretch Bill. : You guys have got nothing on Mitt! : Team Obama has truly just entered Desperation Station.