Racist much, Senator?[1] Nice Communist flair you have there as well. On Saturday, Missouri State Senator Maria Chappelle-Nadal tweeted a pithy, racist threat against white people. “LET ME BE CLEAR,” she proclaimed on Twitter. “When you exercise your #WhitePrivilege, don’t think I’m not going to remember. I will use it for the future. Uncomfortable?” Media crickets ensued. Do you really believe your overt threats over a race war because of Ferguson, New York and other incidents gives most Americans a second of pause? Your instigating of your supporters promoting threats of violence against police officers should have you removed from office all by itself. Your bigoted attack on white people in general and especially officers is duly noted, Senator. 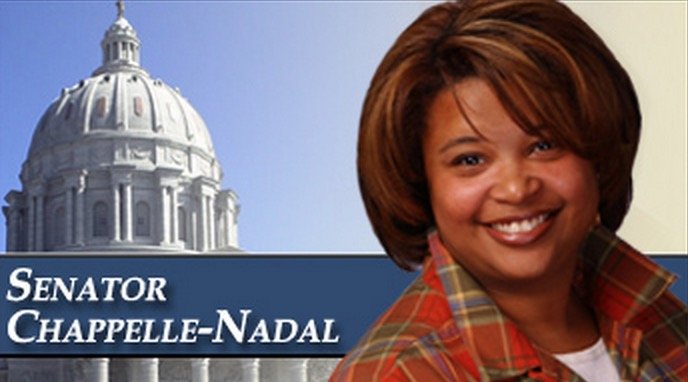 This Missouri State Senator has a threat for white people who use their “white privilege”.

Weasel Zippers[3] left this nutjob’s Capitol Hill office phone number if you want to leave any feedback for her.

Her Twitter background is also Che Guevara. So much fail so little time. If people were using images of Nazis, most of us wouldn’t let them slide. The same rule should apply for Che. It’s amazing how ignorant many people on the Left are.

Missouri State Senator Maria Chappelle Nadal has been a vocal member of the Ferguson protest movement.

In AUgust she told[5] Missouri Democratic Governor Jay Nixon to “F*ck off.”

This weekend she threatened Missouri voters over their white privilege.

At one point, she accused police of purposely planning and executing the violence in Ferguson. Now, Chappelle-Nadal shrilly screams “race war” and off her racist way she goes. It would seem that unless your skin color is black, the genteel lady Senator of Missouri (snort), is just not that into you. But she excels at fascism, racism and Communism. Oh, my. 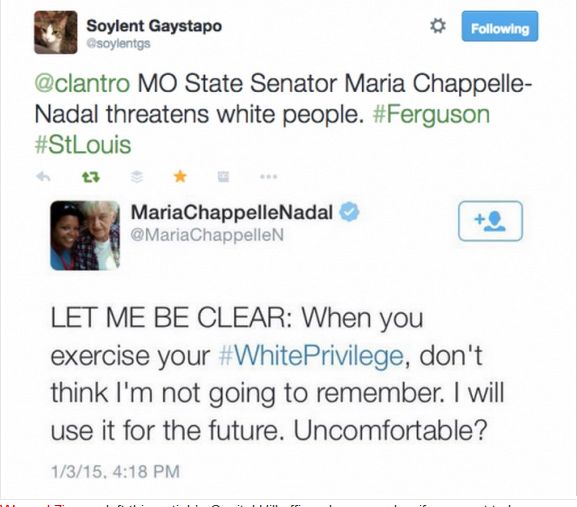