US Marine Brutally Disrespected, Then Tossed Out Of Clinton Rally – For Asking THIS Very Valid Question…

This is just outrageous[1] and disrespectful in the extreme. A veteran stood up at a Hillary Clinton rally in South Carolina and asked Bill Clinton about Benghazi. The crowd booed him and demanded he be removed, which security did. A woman next to the Marine shouted, “Hillary lied over four coffins!” And she’s right, but the acolytes of Clinton don’t care about what is wrong and what is right. They don’t care that lives were lost and their blood is on the hands of Barack Obama and Hillary Clinton. All they care about is Marxism, freebies and entitlements. That’s Hillary Clinton in a nutshell. 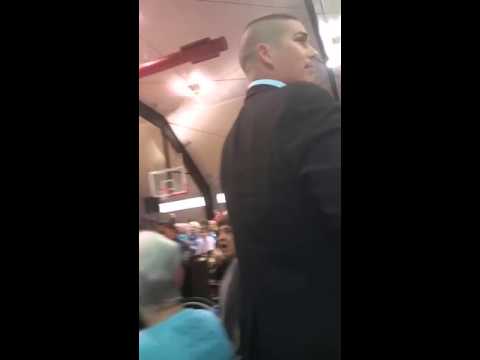 Hillary Clinton supporters booed and shouted at a Marine veteran until security forcibly removed him – all because he asked about Benghazi.

The incident happened at a Clinton rally in Bluffton, South Carolina on Friday, where the man who introduced himself as a veteran asked former President Bill Clinton why his wife “lied over the coffins” of the men killed in the Benghazi attacks.

“I did eight years of active duty service, two tours of Iraq,” the Marine said, to a silent reaction from the crowd.

“We had four lives in Benghazi who were killed and your wife tried to cover it up,” he said, causing the crowd to boo wildly.

To President Clinton’s credit, he thanked the man for his service and tried to answer him, but the crowd was too rowdy shouting, “sit down” and “throw them out.”

They also forcibly ejected the woman. This is disgraceful and these people should be ashamed of themselves. This is one of the reasons Americans are flocking to Donald Trump who loves veterans and makes a big deal out of their service and sacrifice. “To me the story is the crowd,” Fox & Friends host and Army National Guard veteran Pete Hegseth said Saturday. “This guy stands up (and) said ‘I’m a Marine. I’ve done two tours in Iraq’ — You go to a Republican rally, tell it like it is, the crowd erupts in applause for the Marine and says ‘thank you for your service this is fantastic,’ instead silence, crickets (at the Clinton rally). It shows you we’ve got two very different electorates that look very differently towards that service.” It’s night and day, Marxist and conservative.