Those criticizing Pope Francis as the “Red Pope” have yet another reason to rail against him with the announcement that the Vatican has signed a new peace treaty with the “state of Palestine” despite the fact that no such state exists not to mention that the Palestinians are a terror group whose chief goal–one they have always steadfastly refused to change–is to kill all Jews. 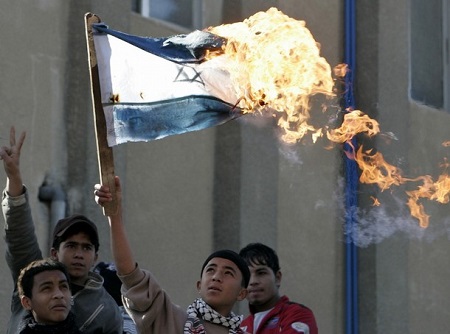 The AP reports today[1] that it has signed a treaty with the terrorist state of Palestine in order to “help stimulate peace with Israel.”

Vatican Foreign Minister Paul Gallagher and his Palestinian counterpart, Riad al-Malki, signed the treaty at a ceremony inside the Vatican.

Israel expressed disappointment when the Vatican announced last month that it had reached final agreement with the “State of Palestine” on the treaty regulating the life of the Catholic Church in the Palestinian territories.

It repeated that regret in a Foreign Ministry statement Friday, saying the move hurt peace prospects and would discourage the Palestinians from returning to direct negotiations. It warned that it would study the agreement “and its implications for future cooperation between Israel and the Vatican.”

Gallagher, though, said he hoped the Vatican’s recognition “may in some way be a stimulus to bringing a definitive end to the long-standing Israeli-Palestinian conflict, which continues to cause suffering for both parties.”

So, placating terrorists will get them to change their mind? No, Red Pope Francis, it won’t.