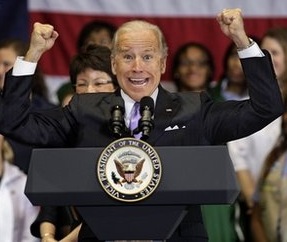 On the tail of the Enviro-Nazis making a film depicting children being murdered[1] because they refused to agree to the globaloney religion — showing the left’s inability to brook opposition without resorting to violence or threats of same — Vice President Joe Biden has announced that he’d like to “strangle” any Republican[2] that opposes his big spending, bailout-a-minute government.

“If I hear one more Republican tell me about balancing the budget, I am going to strangle them,” Biden said at a fundraiser in Minnesota, according to a pool report. “To the press, that’s a figure of speech.”

This violent mindset seems to be endemic in leftism. Take last weekend’s poorly attended left-wing rally, “One Nation,” held in Washington D.C. There a correspondent from the conservative magazine Human Events was assaulted by a distempered leftist[3].

The Tea Party folks are well acquainted with leftist violence, too. Kenneth Gladney, a black man attending a Tea Party event in St. Louis in 2009, was attacked and beaten by members of the SEIU[4], the Service Employees International Union. Another man had his finger bitten off[5] by a left-winger upset at those that stood against Obamacare.

Naturally, for well over 100 years leftist unions have been involved in violence. Property destruction, assault, even murder is a common tool of union thuggery. In fact, Richard Trumka, the current leader of the AFL-CIO, himself has a history of using violence against his enemies[6].

Of course, there is also a long habit of the left rewarding violence. One of the left’s favorite sons is a domestic terrorist that himself engaged in armed insurrection against the USA and was involved in the murder of a police officer in the 1960s. This domestic terrorist, William Ayers, was not only welcomed with open arms by the academics at the University of Illinois at Chicago, but became a close friend to Barack Obama, the man that would be come president.

Even in Obama’s hometown of Chicago a former racebaiting, anti-American was elected to office by leftists. Bobby Rush[7], a former member of the Black Panthers — a group known for its drug pushing, murder and other violence — has served as a congressman from the Chicago area for nearly two decades. His history of violence and race-hate didn’t seem to harm his chances to become a celebrated congressman at all.

Speaking of the Black Panthers, during the 2008 election two members of this violent organization stood outside a polling place in Philadelphia armed with weapons to intimidate white voters[8]. Naturally, Obama and his administration actively defeated attempts to prosecute these criminals.

In short, the left never shies away from using or threatening violence to get its way in politics. So, in the end, it isn’t surprising at all that the Vice President of the United States, a true-blue leftist, is quick to threaten violence against those that oppose him.

One question comes to mind, though. What would the leftist media have done if Dick Cheney said such a thing? The caterwauling from the Old Media leftists would take months to die down, wouldn’t it?