Obama appearing at a political rally is the literal kiss of death. People can’t wait to head for the exits once he opens his lying pie hole. Looks like his halo has slipped and his wings have been clipped. Not even his base has patience for his Marxist shenanigans these days. Wisconsin does the walk of life and dumps the Bamster[1]. 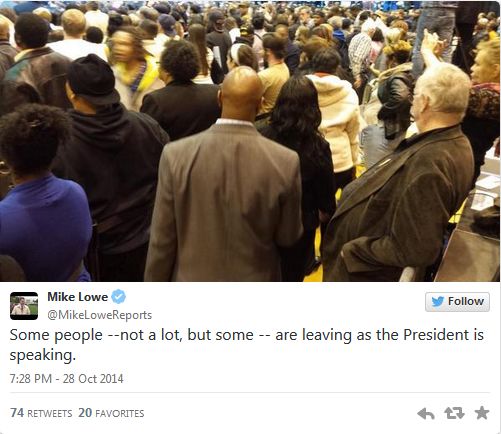 From The Weekly Standard[2]:

As President Obama spoke this evening in Wisconsin, the crowd began to file out. Here’s video that captures some folks leaving, even as Obama’s voice can be heard in the background:

Mike Lowe, a political reporter, also made the observation on Twitter. “Some people – not a lot, but some — are leaving as the President is speaking,” wrote Lowe.

Obama spoke tonight at a rally for Mary Burke, the Democratic gubernatorial candidate in Wisconsin.

Notice how it was stressed that not a lot left – well, there weren’t that many there as far as I could tell and that looked like a pretty steady stream to me. As Obama bloviated from the stage, there was no one swooning in the aisles and just a very few vocal agreements from the audience. Here’s a tip to Democratic candidates – don’t let Obama stump for you. The plague is more popular these days than the Marxist-in-Chief.