VIDEO: Gays Say They Are Against ‘Hate Speech,’ But Excuse It From Their Own Side

Once again we have proof that to be a liberal is to be a hypocrite and liar. We all know that the left–and particularly gay people–have the reputation of being the “most tolerant” and for standing against “hate speech.” But this great video proves once again that liberals think that only what other people say is “hate speech” and when they or their side engage in it, why that is something to be excused. 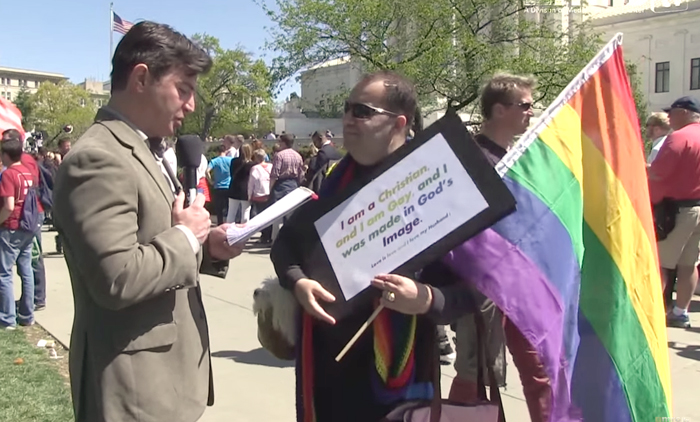 The MRC’s Dan Joseph talked to gay rights supporters[1] in Washington D.C. about the hate-filled comments made by gay rights icon Dan Savage and read to them his comments without telling them who said it. The gays agreed that it was hate speech. But then when they were told it was their best buddy Dan Savage, suddenly they changed their minds and decided that it was OK for him to talk that way.

Dan Savage is one of the most provocative voices of the gay rights movement. He is a commentator, an activist, an author – and is slated to have his very own sitcom on ABC.

Despite Savage’s legions of fans within the gay community, the star has a history of making statements about those who he disagrees with politically that any sane person would find absolutely odious, vulgar and vitriolic.

For example, Savage once opined that a Pennsylvania senate candidate, Carl Romanelli “should be dragged behind a pickup truck until there’s nothing left but the road.”

He also led a campaign to turn Rick Santorum’s last name into a slang term for something so vile that it can not be described on this website.

Savage has a long history of engaging in this type of rhetoric, all in the name of shaming those who don’t buy into his agenda.

When the gays protesting the Supreme Court were told of Savage’s hateful speech, they completely excused it because he was on their side. This proves that they aren’t against hate speech. They are 100% for it when their own guy uses it.

Liberals are liars and hypocrites.