In yet another example that shows that our system of miseducation is an utter failure, a Chicago area football player was suspended by school administrators for trying to stop a bully from hurting a smaller kid. 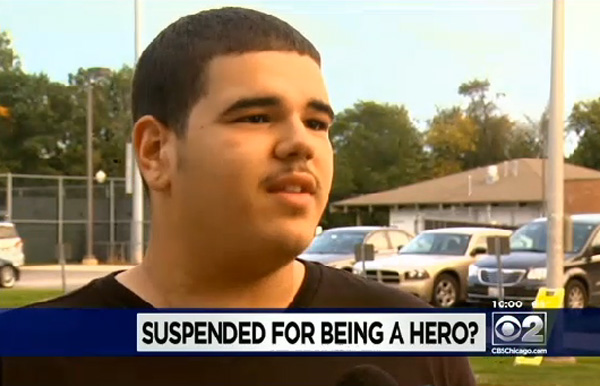 The football player says he was only trying to stop bullying like all the adults keep claiming everyone should.

A father says instead of his son being treated as a hero for preventing a bully from attacking another student, he was suspended.

The Elmwood Park family says they are outraged over the schools decision.
CBS 2’s Brad Edwards reports there’s a stir in the halls of Elmwood Park over what happened to Mark Rivera.

“It’s a really small community so I really can’t stand for someone to be bullied in a community it’s so small,” said Mark.

The message this school policy sends is nothing less than “you are helpless.” It is further an attempt to eliminate any possibility that a child will try to think or act on his own and an effort to eliminate initiative in order to replace it with fealty to the state and blind obedience.

After all, if regular people see injustice and think they should do something about it, that takes power away from the state. The statists can’t have people imagining they have power of their own!