As she warms up her new campaign for president, Hillary Clinton has a message for Christians: You morons better change your feelings on abortion or you are denying women “health care.” 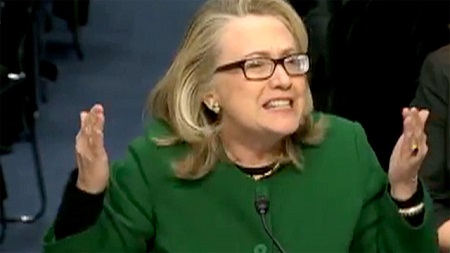 First of all, abortion is not healthcare. It is a mere convenience used to allow a mother-to-be to escape having to deal with the “disease” of pregnancy. At least, that is how the left looks at pregnancy; as a disease.

But Hillary is now out there saying[1] that if you are a Christian who stands agains abortion on religious grounds, why, then, you want women to get sick and die… or something.

Democratic presidential candidate Hillary Clinton took a feminist tone on Thursday. She told attendees at the sixth annual Women in The World Summit that “deep-seated cultural codes, religious beliefs and structural biases have to be changed” for the sake of giving women access to “reproductive health care and safe childbirth.”

“Far too many women are denied access to reproductive health care and safe childbirth, and laws don’t count for much if they’re not enforced. Rights have to exist in practice — not just on paper,” Clinton said.

Here is exactly how she said it at about 8:26 into the video.

There is little doubt that with their hatred of Christians Democrats are on the road toward an eventual outlawing of Christianity. With their beliefs that Christians are evil and want to kill women, it is the only logical end they can come to.

I mean, who needs that old “religious freedom” stuff our nation was founded upon, anyway? Hillary sure doesn’t.