Appearing on the Sean Hannity on Tuesday, a Muslim cleric from Britain insisted that everyone involved in last weekend’s “Draw Mohammad” art event in Texas should be executed. And live, right on the air, he told event host Pamela Geller she should be slaughtered for her actions. 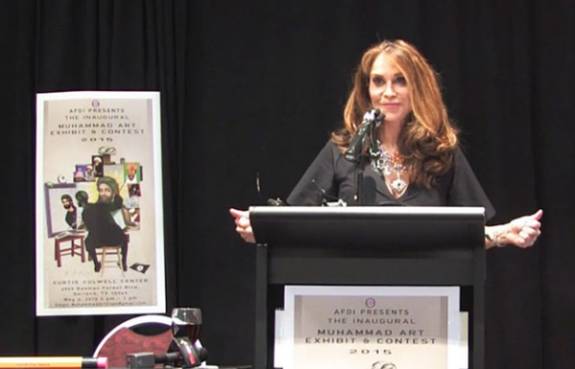 People keep calling Muslim clerics like Anjem Choudary “radical” but what he is saying is not “radical” in the sense that only a few Muslims feel that way. The fact is that even in the USA a large majority of Muslims agree[1] that freespeech should be outlawed and and “blasphemy” against Islam be made illegal.

In any case, Anjem Choudary was unapologetic on Hannity and said right to Geller’s face[2] that she should be killed for her free speech event.

Anjem Choudary: We’re talking about people who deliberately had a competition to insult the messenger Mohammad… If you saw the cartoons that Charlie Hebdo drew you would understand the anger. And now this woman was to draw cartoons or have people draw cartoons to insult the prophet knowing full well that this carries the death penalty in Islam… She should be put before Shariah court and tried and of course she would face capitol punishment.

As Jim Hoft notes, the best part of the exchange is when Geller said, “I’m talking, sir… I know you’re used to stepping over women but you’re not going to have it here.”