Pam Geller, the woman who hosted the “Draw Mohammad” event that was attacked by a pair of thankfully now dead Islamic terrorists, was on CNN today and did a fantastic job destroying the liberal idiot who was pretending to be a “reporter” asking her questions about the event. 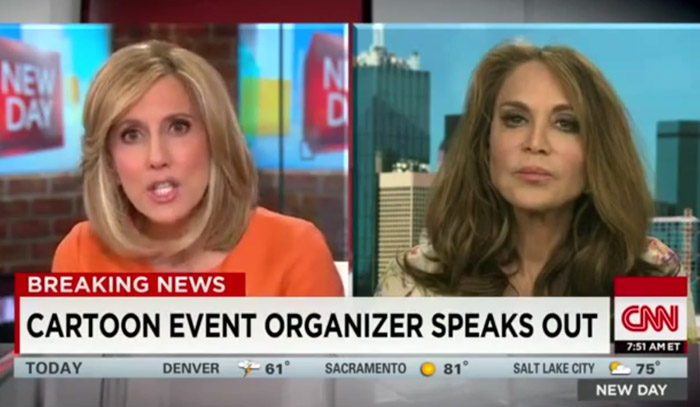 First of all, there was nothing “anti-Islam” about this free speech event[1]. This was an event celebrating our right to free speech first and foremost. Yes it is anti-Sharia, yes it is anti-radical Islam, but this even had nothing against the greater religion of Islam.

Despite the truth, CNN’s Alisyn Camerota was desperately trying to turn the victims into the criminals by saying that Geller and her event was “anti-Islam.”

Gellar made Camerota look like the liberal fool[2] she is…

Pamela Geller: Increasingly we are abridging our freedoms so as not to offend savages. The very idea that is something offends me, or I’m insulted by something, I’ll kill you, and that way I can get my way, and somehow this is OK with members of the elite media and academia, is outrageous. It’s a cartoon. It’s a cartoon.

Alisyn Camerota: No one is saying this warrants the violence you’re saying. Now, I haven’t heard anyone in the media say that it’s OK for gunmen to show up at an event like this. But, what people are saying is there’s always this fine line between freedom of speech and being intentionally incendiary and provocative.

Pamela Geller: Intentionally incendiary and provocative by drawing a cartoon. This is the low state of freedom of speech in this country. I disagree and I disagree most vehemently. The First Amendment protects all speech not just the speech that we like… When Jesus Christ was put in a jar of urine it was called art. Did Christians like it? Of course not. slaughter people? Did they burn embassies? Did they kill kill whole communities? Of course not.