Surprisingly, two: Democrats: in Iowa have been captured on video praying to God for abortion care. 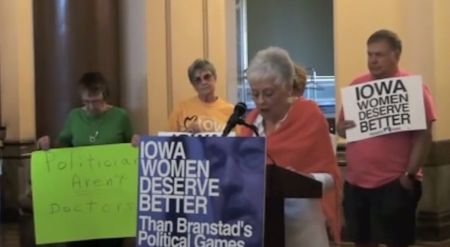 Hatch is a candidate for governor in the state, and was just endorsed by U.S. Sen.: Tom Harkin, D-Iowa. Olson was also running in the race, but withdrew in December.

The prayer, that some will call blasphemy, was part of an abortion rights rally and was led by activist Midge Slater. According to The Iowa Republican, Hatch began to clap at the end of the prayer, but then stopped himself. Olson did not clap.

An excerpt of the prayer:

“We give thanks, oh Lord, for the doctors, both current and future, who provide quality abortion care.”

“We pray for increased financial support for low-income women to access contraception, abortion and childcare.”

“Today, we pray for women in developing nations, that they may know the power of self-determination. May they have access to employment, education, birth control and abortion.”

“Today we pray for the families who have chosen. May they know the blessing of choice.”