In a Black History Month program at a Virginia high school, administrators pushed the lie that Ferguson, Missouri teen Michael Brown was murdered with his hands up and also forced white kids to sing a song saying that cops are murderers and racists. 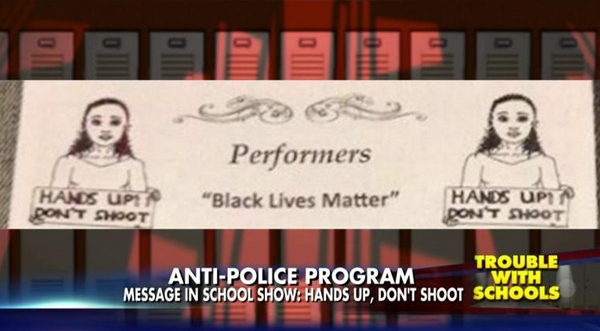 The school also lied to parents[1] telling them that their white kids were only going to sing a “Motown medley” at the program when they were really taught a song that says cops are murderers.

The event, called “Black Lives Matter,” was held at Orange County High School last week. The program listed skits like, “I Can’t Breathe,” “Does my Black Life Matter?” and “They Don’t Really Care About Us.”

…The girl’s mother told Elisabeth Hasselbeck this morning that she immediately felt uneasy when she walked into the auditorium, and contacted her police officer husband to let him know what was going on.

Rebecca said she received no notice about the content of the show, only that the elementary school choir would sing some “Motown” songs.

After the show, Charles said he had to take questions from his young daughter about “why cops shoot black people,” why cops “shoot good people” and whether he is a “bad cop.”

“It really took me off guard. We had to have a discussion with our daughter in great detail about current events that we should have never had to have,” he said.

Parents, you REALLY need to pay attention to the left-wing lies your government schools are force feeding your kids.