You may recall earlier this month when a man from Florida flew a gyrocopter to Washington DC and landed it on the east lawn of our capitol building. Well, now our security services are admitting that their radar and other defense systems could not “see” the gyrocopter as it flew toward Congress. 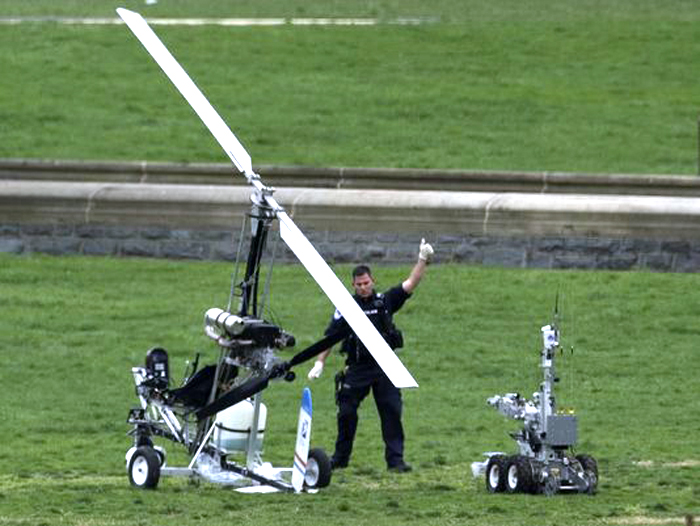 This means that all a terrorist has to do is get his own drone or fly a small airlite craft loaded with explosives right into any building in D.C. and our security services won’t even be able to see it coming[1] until it is too late.

A small gyrocopter that flew through miles of the nation’s most restricted airspace before landing at the U.S. Capitol was “indistinguishable” on radar from non-aircraft such as a flock of birds, a kite or a balloon, the head of the Federal Aviation Administration said Wednesday.

FAA Administrator Michael Huerta told a House committee that the slow-moving gyrocopter appeared as an “irregular symbol” on radar monitored by air traffic controllers. Huerta and other officials said the small, unidentified object did not pose an apparent threat before landing on the Capitol’s West Lawn April 15.

Forensic analysis conducted later identified a slow-moving object that traveled about 70 miles from Gettysburg, Pennsylvania, to the U.S. Capitol. Officials now believe that was the gyrocopter. A dot representing the gyrocopter “appeared only intermittently throughout the flight,” Huerta said.

Details about how the copter flight was tracked emerged Wednesday as questions continued two weeks after the open-air copter – described by its pilot as a “flying bicycle” – landed at the Capitol. Law enforcement agencies gave conflicting accounts about whether the copter could have been shot down and offered few answers about how the response was coordinated and what changes, if any,

This seems a bit absurd, doesn’t it?