Wow. That takes cojones to sit there and tell a whopper like that.[1] If you bust out laughing after you hear Hillary Clinton tell the world: “Well, look, anybody who knows me knows I’m not in the pocket of anyone, and anyone who thinks they can influence me certainly doesn’t know me,” you are not alone. Several of CBS’ anchors couldn’t contain themselves either. Literally laughable. Far be it from me to ever say anything even remotely supportive about commie Sanders, but he has a point about Hillary Clinton’s Wall Street ties. She’s a corruptocrat and will whore herself for money and power to virtually anyone. However, she prefers terrorists and communists. She has principles after all. 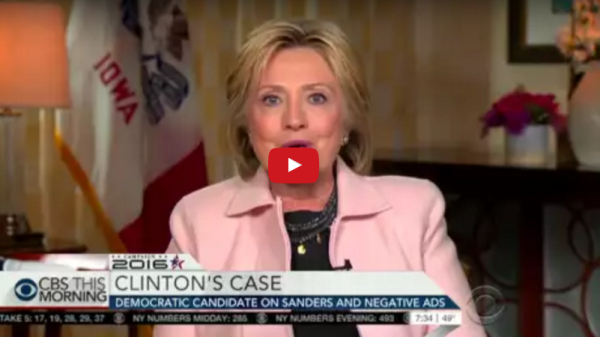 “Well, look, anybody who knows me knows I’m not in the pocket of anyone, and anyone who thinks they can influence me certainly doesn’t know me,” Clinton said.

You may have laughed at that comment, and you wouldn’t be alone. In fact, several of CBS’ anchors laughed at the remark too, including network stalwart Charlie Rose.

Clinton seems absolutely oblivious to the fact that she is a cosmic joke. She isn’t a voice for change… she IS the status quo. This is why she came to within a hair of losing Iowa to Bernie Sanders. He has captured the young vote. They know that Hillary is a lying crook, so they have gravitated to the aging commie with his promises of free stuff and equality. It is the siren song of Marxism and it is deadly. It’s a pity the young followers of the Bern don’t realize he’s the pied piper of slavery. As far as Hillary goes, she’s in everyone’s pocket just as Bill is in everyone’s bed. Evil and corruption seem to be a family affair. Clinton is the only Democratic candidate who’s gotten money from Wall Street and the Washington Free Beacon[3] reported on 31 Clinton fundraisers, past and future, involving the finance industry. Sounds to me like she’s not only in their pocket, she’s in their pants.