Now, that’s liberal fascism at work[1]! How dare a citizen speak up when they haven’t been given permission to speak! Who do they think they are?! Well, sir… and I use that term with contempt… they are the people who live in Ward 2; they are American citizens and they are the voters who keep you in office. Rich’s hatred of the Second Amendment and the Constitution is so intense, he simply cannot contain himself and it showed. Not only is he a Marxist, he’s paranoid and strikes me as mentally unstable. I don’t think anyone gives a flying crap whether he resents being interrupted or not. Joe Rich finds constitutional rights intimidating. What a weasel. 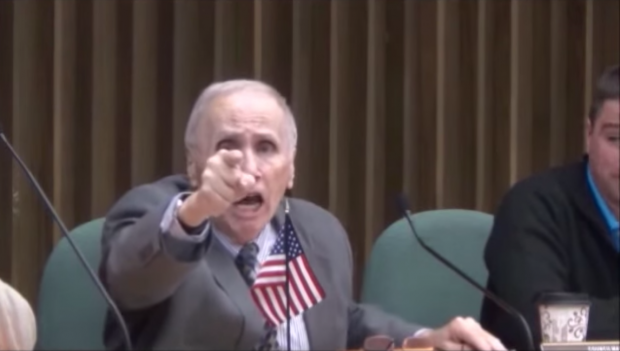 Members of the Dutchess County chapter of the Shooter Committee On Political Education attend a June 15 meeting to oppose a proposed anti-gun ordinance that would require gun owners to lock up all of their firearms in Poughkeepsie, the Poughkeepsie Journal reported[3]. But Rich didn’t seem to appreciate the dissenting opinion on the issue.

“I know why you’re doing this, because you don’t want us to have a law…that would cause you a lot of trouble out there,” Rich said to the pro-gun advocates. “You don’t want them to work…that’s the truth. You’re here to make sure that these laws never get a chance to find out if they are going to work or not.”

When the Democrat also accused those opposing the proposal of not being residents and not “loving” the city, one person in attendance spoke up. The man said to the councilman, “There are people here that live in the 2nd Ward…You know I live in the 2nd Ward.”

After his outburst, the council voted to have an immediate 10-minute recess. Even then, the heated back-and-forth exchange continued between Rich and meeting attendees.

Rich later said he “didn’t mean to lose” his temper, but he “felt it was abusive for them to come there in large numbers, wearing their shirts.”

“They were accusing us of taking their second amendment rights. I got upset, so I stood up — I don’t have to be intimidated by outside organizations like that,” he added, according to the Poughkeepsie Journal[4].

Someone ought to send Rich a memo and let him know that being a councilman doesn’t mean he is also a dictator. If Rich had his way, all guns would be confiscated and the State and Obama would be the last and fatal word for uppity Americans such as those in the 2nd Ward. He didn’t care that he lost his temper – he just regrets he couldn’t have bludgeoned the poor guy who simply stated he lived in Ward 2. These people aren’t his subjects – they don’t have to just shut up, sit down and do as they are told. And being a Progressive Liberal doesn’t make him all knowing either. Rich needs to be removed from office since he seems incapable of understanding constitutional rights, basic diplomacy and the tenants of political discourse.