What Could Possibly Justify Voting for Rahm Emanuel as Mayor of Chicago? 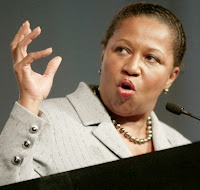 Danny K. Davis, a longtime United States representative, has dropped out of the race to become Chicago’s mayor, creating the situation that black leaders here had for months been clamoring for: a campaign that includes only one major African-American candidate.
Carol Moseley Braun, a former senator, became that candidate this weekend, as Mr. Davis announced his plans to step aside and to support Ms. Braun. The Rev. James T. Meeks, the pastor of a large South Side church, quit his campaign about a week ago.
Pressure to unite around one African-American candidate has been bubbling here for months, in part out of fear that the city’s black vote would be split – diminishing its influence and all but ensuring that a white candidate (like Rahm Emanuel, the former White House chief of staff) or a Latino candidate (like Gery Chico, a former board of education leader) might win on Feb. 22.

I can see the campaign signs now:

CAROL MOSELEY BRAUN for MAYOR
Because America Needs Another Detroit