Way to go Josh![1] Josh Earnest, spokeshole for the White House, just pissed off the FBI good and proper. He had the stones to say that Hillary Clinton was not the current focus of the FBI’s investigation. Tsk, tsk! That’ll send you to hell, Josh. You shouldn’t lie like that, especially when everyone in the country knows you are lying. Josh Earnest has no clearance or visibility into the investigation. And the White House is making this even more political and dividing the FBI and the intelligence agencies from the people who have a right to know about Hillary and her dirty laundry. The only reason those 18 emails between Hillary and Obama are too secret to be shown is that they must be damning in their content. What liars. 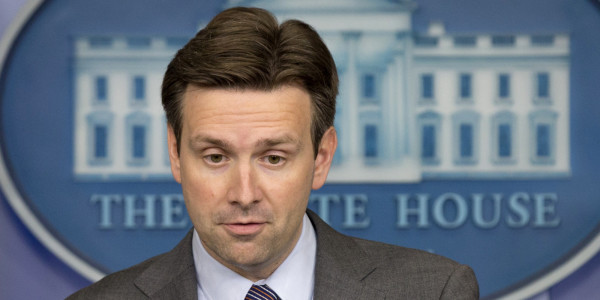 In what was an extraordinary “Friday news dump,” yesterday the State Department revealed some of the most damning info yet about Hillary Clinton’s emails. As we reported[3], some of the emails the former secretary of state sent and received from her private server are so “damaging,” they will be withheld from the public in their entirety. Also being withheld are 18 emails[4]between Secretary Clinton and President Obama himself.

While many of us — including experts on the matter — saw yesterday’s revelations as some of the most damning yet for the Democrat presidential frontrunner, White House press secretary Josh Earnest nonetheless suggested Hillary Clinton is not the target of the FBI’s current investigation.

And, apparently, the FBI is good and mad — ‘super pissed off’ — about Earnest’s comments.

Catherine Herridge reported: “That statement by Josh Earnest has got the back up of our contacts at the FBI and Justice Department for two reasons… They are SUPER PISSED OFF to use a technical term. Number one, Josh Earnest has absolutely no clearance or visibility in the FBI investigation. Number two, they say it really seems part of a troubling pattern from the White House because the president earlier said he did not see any national security implications to the Clinton emails and then we found out he had never been briefed.” You know, as much as Obama and Josh Earnest keep saying they will not get involved in the Clinton mess, they seemed to be awfully involved in it. If I didn’t know better, dumping this information on the Friday before the Iowa caucus smacks of sabotaging Hillary. Bernie Sanders just met with Obama in the White House this week. Et tu Sanders?