Whoopi Goldberg, ‘The View,’ and Others Fall for Hoax That Christian Pastor Wanted Women Arrested for Saying ‘God’ During Sex

On Monday the ninnies on ABC’s “The View” women’s chat show got all hot and bothered by a Christian pastor who they said he wanted women arrested for blasphemy for saying “Oh, God” during sex. Whoopi Goldberg and the girls of “The View” were furious over this pastor’s outrageous demand. Only the truth is, the ABC show hosts had fallen for a hoax. The story they were all upset at was a joke, not the truth. 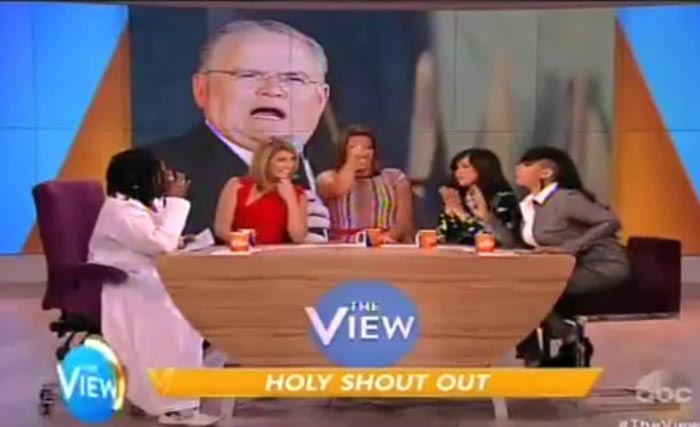 The story was created out of whole cloth by a parody site on the Internet, but the ABC hosts fell for it[1] hook line and sinker.

During Monday’s episode of the ABC daytime talk show “The View,” Whoopi Goldberg and the crew were fooled by a fake news website that claimed pastor John Hagee of San Antonio’s Cornerstone Church wanted women prosecuted if they said “God” during sex.

There’s only one small problem with the story as reported by Whoopi and company — Pastor Hagee never said what they claimed he said.

Additionally, Newslo, the website on which the story first appeared, openly admits to being a place where facts and fiction are frequently intermingled.

The cluckers on “The View” weren’t alone in falling for the fake story.

Additionally, several news outlets around the world, including England’s Daily Mail and The Mirror picked up the story. Many have since pulled their original posts or offered clarifications.

Once again liberals don’t bother to find out the truth if the story fits their hate-filled biases.