The Official White House website[1] has a questionable new addition. When you land on the White House main page a notice fills your screen asking you kindly if you’d like to supply them with your email address so that they can send you “periodic updates from President Obama and other administration officials.” 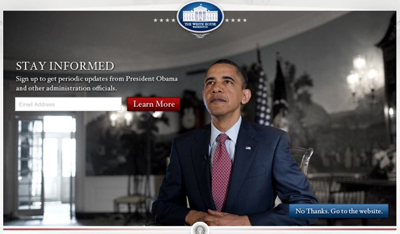 Well, isn’t that nice? Why, you can give Obama your email address and he’ll send you his “updates.” Gosh. Just before an election, too. Now, I wonder: just where will all those email addresses go? After all, it is illegal to use official government apparatuses for political campaigning, isn’t it?

Doug Ross thinks that the Obama Administration has turned the official White House website into an illegal campaign arm[2] of Obama’s 2012 reelection campaign. I can’t say it is too much of a stretch to think this, either.

Certainly we cannot say with certainty that all these email addresses supplied to the White House will *cough* accidentally *cough* end up in the hands of Obama’s 2012 campaign staff, but the big question is, who is watching?

Ross has another good point, too. “There is only one reason that the White House is collecting email addresses,” he writes. “It is to promote, directly or indirectly, the reelection campaign of Barack Obama.”

Too true. Even if these email addresses are not used to directly promote Obama’s campaign efforts, the fact that emails are going out under his name during an election campaign indirectly promotes him anyway.

Perhaps, though, since he is the incumbent and has a job to do during the campaign, this is unavoidable. But in this era of mass communications, it is an all new deal. Instead of just being on TV or the radio, instead of just being mentioned in news stories while simultaneously doing his job and running for reelection, Obama can now flood the personal email inboxes of millions of people individually while “doing his job.”

This level of personal contact was unheard of during past presidential campaigns. Won’t constant emails “from the White House” help sway voters Obama’s way whether they have direct appeals in them from his campaign or not?