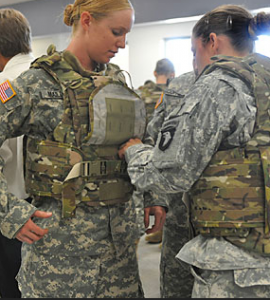 As Bridget Johnson tattled this morning,: polls show[2]: support for women in combat. : There has been a lot of discussion regarding Secretary of Defense Leon Panetta: lifting the ban[3]: on women in combat positions. : As Fox News posted on January 24:

The change would open hundreds of thousands of front-line positions and potentially elite commando jobs to women. Panetta and Joint Chiefs of Staff Chairman Gen. Martin Dempsey both approved the change Thursday, and the White House separately said it endorsed the decision. : The groundbreaking move recommended by the Joint Chiefs of Staff overturns a 1994 rule banning women from being assigned to smaller ground combat units. Panetta’s decision gives the military services until January 2016 to seek special exceptions if they believe any positions must remain closed to women.

Slate had a piece from a veteran, Kayla Williams,: which detailed[4]: that women have been on the frontlines for years. : In fact, 150 U.S. servicewomen in our armed forces have been killed in Iraq of Afghanistan. : It also could be to our advantage, as we try to maneuver ourselves out of Afghanistan since:

[T]hose who served in Iraq and Afghanistan came to understand that in complex counterinsurgency operations, especially in Muslim nations, the presence of women troops is a vital way to interact with the civilian population–so important, in fact, that military leaders have long been skirting the old regulations by placing women in combat units.

However, Williams is a realist about this policy shift, and noted that it’ll be phased in over the years.

Much work remains to be done to implement this landmark reform. It is likely that the military will follow a multiyear process for phasing in changes,: similar to that planned by the Australian military[5]….the U.S. military services (particularly the Army and Marines) may argue that some jobs, particularly in the Special Forces, should remain closed to women. But as women continue to prove their abilities in a growing number of positions, those exclusions will become harder to justify.

It is true that not all women can handle the physical demands of military service. However, neither can all men. In fact, only 25 percent of today’s young people qualify for military service at all–the rest are too obese, too poorly educated, or have criminal backgrounds that bar them.: Today [Jan. 24] Panetta is acknowledging that to maintain the high standards of the military, assignments should be based on ability, not gender.

Key in critical aspects of counter-insurgency, helping ease the strain on our ground forces, and providing a buffer from the lack of qualified candidates to fill the ranks in the future — : it sounds rational to lift the ban, right? : Not really, in fact, some conservatives, like the editors at: National Review, feel that the military isn’t the area for progressive social experimentation. : Furthermore, if we are going to do this, it needs to be comprehensive, and the standards for women in combat need to go all the way.
The Editors at: National Review: on January 25 had this to say about the ban lift.

The administration has promised that there will be no reduction of physical standards to accommodate women in combat roles, but that promise almost certainly is false – and Senator McCain, who has endorsed the move, should know better than to pretend otherwise. The political mandate to integrate women into the military had disastrous consequences for standards at West Point, as Walter Williams documented the: last time we had this debate[6]. The use of “gender-specific” physical standards meant that female candidates were given passing marks on tests when underperforming their male counterparts on such common benchmarks as push-ups, sit-ups, and running 1.5 miles.This repeats the experience of similar civilian agencies, such as police and fire departments, in which standards have been lowered under the guise of revising them for professional relevance. One particularly comical feature of these developments has been the authorities’ insistence that they are acting independently of political pressure while simultaneously acknowledging that they are: motivated by the fear of litigation[7]: brought by feminist groups. The ideological absurdity at play here is hard to exaggerate: When members of the Los Angeles city council demanded hiring quotas for the LAPD and a consequent relaxation of standards, they argued that concerns about physical difference could be overcome by implementing a “feminist approach to policing[8].” We pray that we may be spared a feminist approach to national security.

Some female veterans are skeptical about the change. : Virginia Kruta, a ten-year army veteran,: posted on her blog[9]: that:

The military is strong in part because it is the most discriminatory workplace in the nation. You can be kept out, fired, or barred from promotion simply for being too tall, too short, too thin, too fat, too sick, too injured,too stupid, and the list goes on. Every move it has made in the direction of political correctness has been a move away from strength.

Jazz Shaw at Hot Air quoted a female Marine, known as “Sentry,”: who gave this testimony[10], and delved into the one area that’s on everyone’s mind: physical limitations.

: …: deployed to Anbar Province, Iraq. When I was active duty, I was 5’6, 130 pounds, and scored nearly perfect on my PFTs. I naturally have a lot more upper body strength than the average woman: not only can I do pull-ups, I can meet the male standard. I would love to have been in the infantry. And I still think it will be an unmitigated disaster to incorporate women into combat roles. I am not interested in risking men’s lives so I can live my selfish dream.
[…]
Regarding physical limitations, not only will a tiny fraction of women be able to meet the male standard, the simple fact is that women tend to be shorter than men. I ran into situations when I was deployed where I simply could not reach something. I wasn’t tall enough. I had to ask a man to get it for me. I can’t train myself to be taller. Yes, there are small men…but not so nearly so many as small women. More, a military PFT doesn’t measure the ability to jump. Men, with more muscular legs and bones that carry more muscle mass than any woman can condition herself to carry, can jump higher and farther than women. That’s why we have a men’s standing jump and long jump event in the Olympics separate from women. When you’re going over a wall in Baghdad that’s ten feet high, you have to be able to be able to reach the top of it in full gear and haul yourself over. That’s not strength per se, that’s just height and the muscular explosive power to jump and reach the top. Having to get a boost from one of the men so you can get up and over could get that man killed.

: Heather MacDonald at: National Review: also mentioned this obstacle, and called this move is a “disastrous mistake[11].”

: The number of women who are the equal to reasonably well-developed men in upper-body strength and who have the same stamina and endurance is vanishingly small. Because the number of women who will meet the military’s already debased physical-fitness standard will not satisfy the feminists’ demand for representation, the fitness standard will inevitably be lowered across the board or for women alone, as we have seen in civilian uniformed forces.
[…]
If a woman is taken prisoner, will special efforts be made to rescue her to save her from the risk of rape? If so, the necessary equality among unit members will be destroyed. If, however, policy requires that she take her chances along with the male captives, we are requiring men to squelch any last remaining vestige of their impulse towards protection and appreciation of female difference.

MacDonald also noted that we should “expect a windfall to the gender-sensitivity-training industry, which will be called in both before and after the entry of women into combat units to eradicate endemic male sexism.”
Our military is the best in the world. : Our soldiers are, for the lack of a better word, killing machines — not office co-workers. : However, I still have no problem with women on the front lines for the reasons I mentioned above. : However, that’s dependent on if the Obama administration doesn’t reduce, or dumb down, the various physical standards. : Only the best of the best, men and women alike, should be out there arranging meetings with God for our enemies. : Furthermore, just because women: did well in the Summer Olympics[12], which is still a phenomenal achievement, doesn’t mean they’re all ready for combat. : It’s a false equivalency.
Now that gender exclusivity on the frontlines has been virtually erased, will liberals, progressives, and feminists be as vociferous in their advocacy for women : joining the: Selective Service[13]: at eighteen?
Originally posted on: PJ Tatler[14].
Endnotes: