It’s ironic that Alan Grayson has accused the Republican Party of waging a “war on women” because it sounds as if he waged his own one man “war on women” against his wife[3]. 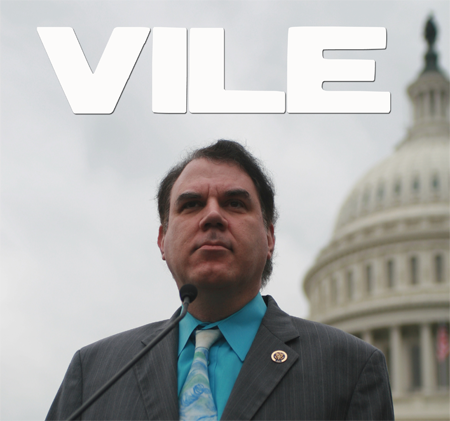 A judge has granted a temporary protective injunction against U.S. Rep. Alan Grayson, after his wife filed paperwork accusing the Orlando congressman of shoving and injuring her during an incident this weekend.

Lolita Grayson’s petition for the injunction, dated Monday, says her husband pushed her against a door, causing her to fall to the ground, during a confrontation Saturday at their home on Oak Park Road, near Windermere.

The incident comes just less than two months after Lolita Grayson filed a divorce petition stating that their marriage of nearly 24 years was “irretrievably broken.”

Let’s face it; if there had been a betting pool on the member of Congress that was most likely to go all Bobby Brown on his wife, Alan Grayson would have probably been the first one to be chosen. He’s just a rotten, nasty, belligerent, vindictive human being with no redeeming characteristics other than a large wallet. So, a piece of work like Alan Grayson being elected to the House in the first place? That’s a surprise. Alan Grayson hitting his wife? Not exactly shocking.