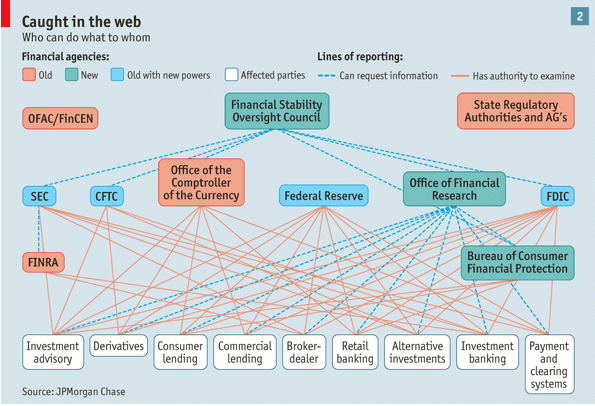 Courtesy of The Economist

We all know this miserable mess of a bill. : It was suppose to protect us from another financial crisis that mandated 400 new regulations, of which only 98 are coherent enough to have been enacted into law[2]. : The Economist had a good piece on the bill last February stating:

When Dodd-Frank was passed, its supporters suggested that tying up its loose ends would take 12-18 months. Eighteen months on, those predictions look hopelessly naive. Politicians and officials responsible for Dodd-Frank are upbeat about their progress and the system’s prospects, at least when speaking publicly. But one banker immersed in the issue speaks for many when he predicts a decade of grind, with constant disputes in courts and legislatures, finally producing a regime riddled with exceptions and nuances that may, because of its complexity, exacerbate systemic risks rather than mitigate them.

Further down the column, the piece illustrates how this bill was just too big and lacks oversight.

: Along with requiring oodles of contestable rules, Dodd-Frank mandates 87 studies on big and small issues, ranging from the impact of drywall on mortgage defaults to the causes of the financial crisis. Once again, deadlines have been missed and progress is limited: 37 studies have yet to be completed. The ones that have been finished have received little public attention; trying to drink from the rule-making fire hose leaves little time for absorbing the output of the reporting one. Some of the reports seem to reach odd conclusions. A report from the FDIC contends that had Dodd-Frank been in effect four years ago, Lehman Brothers’ creditors would have received 97 cents on the dollar; one expert on the case calls this ludicrous. The problem is not that the reports are necessarily wrong, but that no one is scrutinising them.

This was back in February! : Alas, government efficiency at its finest. : In the meantime, Heritage states[3] that this bill has been a nice launching pad for the following regulations that aren’t related to the 2008 meltdown.