Worse Than Neville Chamberlain: This Editorial Rips Obama So Bad You HAVE to Read it

This amazing editorial is a MUST read. As Obama stumbles and fumbles in this disastrous nuke deal with Iran an editorial in the Observer rips Obama as worse than the British Prime Minister who caved in to Hitler on the eve of WWII. 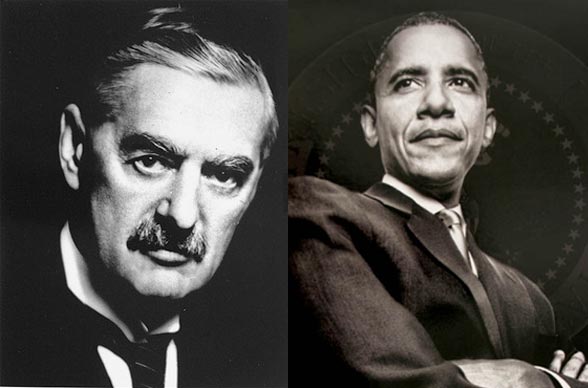 British PM Neville Chamberlain has been excoriated as the epitome of liberal weakness when he caved in to Hitler and announced “peace in our times.” But the Observer points out[1] that Obama is actually worse than the guy who facilitated WWII!

Barack Obama has been compared to British Prime Minister Neville Chamberlain , who concluded the ill-fated Munich Pact with Hitler in 1938. But Chamberlain acted out of a sincere belief that he was avoiding a greater evil. Chamberlain was not thinking of his place in history. He was thinking only of the Britain that he loved, a Britain that was all but disarmed, exhausted, and vulnerable. He was dealing with a nation that had been decimated by the Great War, a nation whose “best and brightest” five years earlier had declared in the infamous Oxford Oath that they would not fight for king or country, and a nation that was as materially unprepared for war as Germany was prepared to fight. Chamberlain dealt from a position of weakness, one that Hitler continually exploited in the negotiations, even by changing the time and place to make it more inconvenient for the British leader to attend them.

In sharp contrast, Mr. Obama is acting out of personal aggrandizement. He believes he is replicating President Richard Nixon’s historic opening of China. For Mr. Obama, the Iranian nuclear arms deal is about his place in history. Mr. Obama is dealing from a position of strength that he refuses to use. The sanctions have hurt Iran. Falling oil prices only add to Iran’s vulnerability. Instead of using the sanctions to pursue his original promise that Iran would not get the bomb, Mr. Obama has moved the goal post. Iran would not get the bomb immediately. It would be permitted to enrich uranium well beyond the 5 percent need for generating nuclear energy and be left with a breakout capacity to create a bomb.

This editorial is a MUST read.