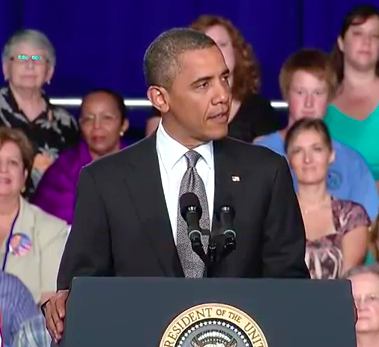 Unemployment has risen to 8.3%. : Can we safely say that Keynesian economics is dead? : I mean we mention those horrible Bush Tax Cuts that created 8.1 million jobs and 50 straight months of uninterrupted economic growth[2]. No No.

Even though, as Heritage posted in June of 2011:

With Obama, we have spent nearly a trillion dollars on the stimulus, which got us nowhere. : All of the net jobs created are part-time[3]. : We also spent a trillion dollars on a new health care entitlement that will still leave 30 million uninsured ten years from now[4]. : Where’s the beef? : This isn’t hope and change. It’s abject failure.

Guy Benson of Townhall.com posted a good analysis of the economic news today[5]: writing that the:

Hairbrained: attacks[6]: and sample-loaded: polls[7]: cannot insulate the president from economic reality.:  The “good” news in today’s: breaking jobs report[8]: is that the US economy added 163,000 jobs in July — the most in five months, but still not enough to keep up with population growth.:  The bad news:

(1): U3 unemployment ticked: up: to 8.3 percent.:  We have now witnessed 42 consecutive months of eight percent-plus unemployment in America, despite the president’s promise that his $825 Billion “stimulus” program would prevent that statistic from eclipsing the eight percent mark.:  The White House projected that unemployment would now be at: 5.6 percent[9], thanks to the stimulus.

(2): 155,000 Americans gave up seeking work and dropped out of the labor force in July, nearly as many as the jobs gained.:  Overall, according: to CNBC[10]: “The report showed that: the actual amount of Americans working dropped by 195,000, with the net job gain resulting primarily from seasonal adjustments.”

(3): The U-6: “real” unemployment figure[11]: crept up to a full 15 percent.:  The U-3 number (8.3 percent) would be: 11 percent[12]: if Obama had maintained the workforce participation rate he inherited.:  Instead, it has slipped to a three-decade low, perversely “helping” the unemployment rate.:  The U-3 number among Hispanics and African Americans remains in double-digits (10.3 and 14.1 percent, respectively).

(5): The media and the White House (I repeat myself) will try to spin this as promising jobs data because of the 163,000 number, ignoring everything else you’ve just read.