Welcome Hillary Clinton, our new overlord and the next lawless Democrat to head this failing country. At least this is as far as the media is concerned. By what the media did yesterday we have proof that Hillary is their choice. 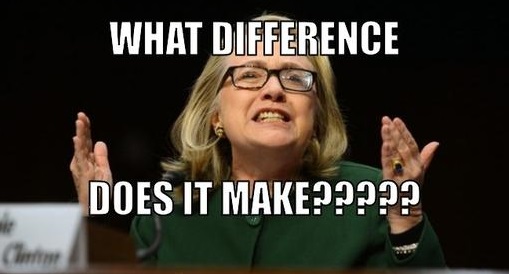 Yesterday Hillary appeared at an event held by the Toner Prize for Excellence in Political Reporting, an organization that honors reporters for their work.

But during her speech Clinton lectured the media and joked about her constant law breaking and about how much she stands against transparency in government. Then she left without even allowing all the journalists present to ask questions. Yet, these mediots LOVED her anyway[1].

On Monday evening, mainstream media reporters reportedly gave Hillary Clinton a standing ovation after she joked about her private email scandal and took no questions from the press–at an event honoring excellence in journalism.

According to a National Journal report, Clinton took no questions after her 20-minute speech in Washington, D.C., which prompted the Washington Post‘s Dan Balz, who won this year’s Robin Toner award for excellence in political reporting, to reportedly make Clinton an offer: “I am happy to yield my time back to you if you want to take some questions.” Time reported that “Clinton received a standing ovation” anyway “from the journalist-heavy crowd.”

In her speech, Clinton reportedly cracked jokes about her email scandal, saying she was “all about new beginnings. A new grandchild. A new hairstyle. A new email account. A new relationship with the press. No more secrecy, no more zone of privacy… After all what good did that do for me?”

“Before I go any further, if you look under your chairs, you’ll find a simple non-disclosure agreement. My attorneys drew it up,” she reportedly quipped.

After claiming her “relationship with the press has been at times, shall we say, complicated,” Clinton, according to CBS News, “challenged the journalists in the room to be thorough and measured.

And then what happened after she spoke? You guessed it, Hillary was given a standing ovation by these “journalists.”

She shoved it in their face that she broke the law with her illegal email system when she was Sec. of State.

She joked about how she refuses to observe transparency and constantly hides what she does from the people of the United States.

She scolded the press that they aren’t measured.

…. and yet, these mediots gave her a standing ovation after all those thumbs Hillary stuck in their and our eyes.

If this isn’t proof that the media is all in for Hillary and will excuse every single law she breaks, then what is?