I would imagine this is one of many scenes[1] that took place yesterday during Donald Trump’s Inauguration. Protesters formed a human wall to prevent people getting into an event for Trump supporters. A Biker for Trump came over and started yanking people out of the way so his wife and others could get in. One guy told the biker he was being recorded and his response was epic.

I liked the ticked off woman who knocked stuff off the table for good measure on the way by. Then a second guy (not as big or menacing as the biker) came and tried to pull people away. The police pulled him off and you don’t get to see if they forced the wall apart or not. I assume they did, but who knows. DC was definitely a violent place to be yesterday, but well worth it if you got to see the swearing in. 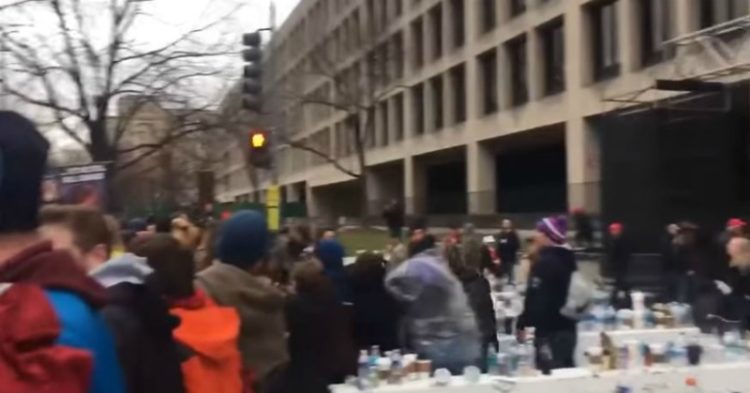 In response to the disturbing reports of DisruptJ20’s plans to protest the inauguration of President Donald Trump, the Bikers for Trump group promised that they would provide security if necessary. On Friday, the protesters decided to create what appeared to be a human chain to block people from getting to where they needed to be and the bikers were not having it.

Video has surfaced showing one of the “Bikers for Trump” busting through a human blockade. DisruptJ20 protesters positioned themselves near entrances to President Donald Trump’s inauguration forming a human chain. It appears the protesters were trying to prevent the biker’s wife from attending the inauguration.

The actions of those forming that wall have to be illegal. I’m so sick of these radical idiots. There’s no way this can end well. They won’t allow it. Their hate overrides every bit of common sense and reason they have. If I were the moron filming the biker, I’d be more worried that those protesters who were caught on camera impeding the freedom of movement of others. Just sayin’.

I really don’t blame the biker for doing what he did. Dave had had enough and he wasn’t going to let them block anyone from getting in. Bikers for Trump vowed to do just what he did, so there is no surprise here. It’s one thing to peacefully protest, it’s another to do what these people are doing. And there are always consequences.