Bikers for Trump recently received their permit to attend the inauguration for Donald Trump, the 45th President of the United States, and now they’ve revealed more information about their plans to control protesters.

Christ Cox was on Fox and Friends to discuss their plan in more detail.

It sounds horrible to say, but they’re planning on building a WALL OF MEAT to block protesters[1] if they get out of control.

You might think they’re making a wall of ham sandwiches or something more grotesque, but it’s not what you think. 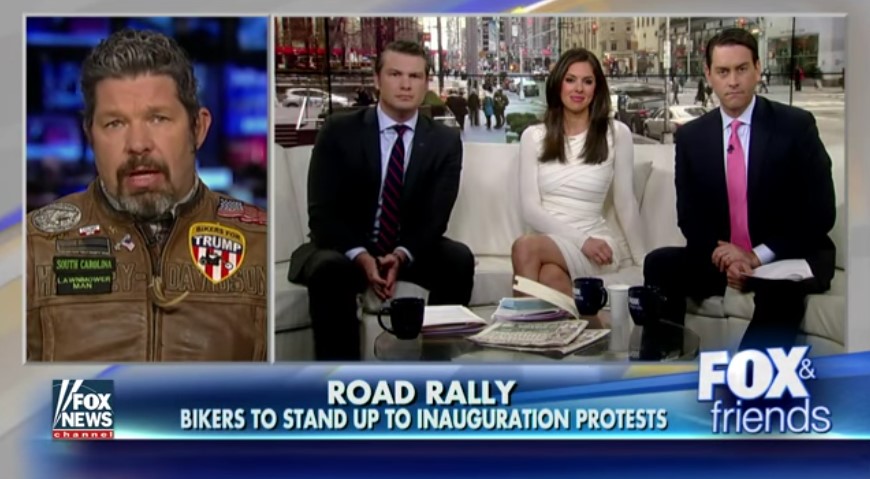 Chris Cox, founder of Bikers for Trump, said the group plans to form a “wall of meat” to protect citizens at the presidential inauguration.

Cox and 200,000 other motorcyclists will be in Washington, D.C., to provide backup to the police to ensure that protesters and rioters don’t ruin the inauguration. The first line of defense is a “wall of meat,” he said.

“We will stand shoulder-to-shoulder with our brothers, and toe-to-toe with anyone that’s going to be breaking down police barriers, assaulting women, spitting on them or throwing things,” Cox told Fox News.

The Bikers for Trump plan to stand gridlocked, side by side, forming a human “wall of meat” daring snowflake protesters to break through. You can only imagine what would happen to one of those poor snowflake social justice warriors if they put their hands on a tough biker.

If any of the liberal anti-Trump protesters get out of control, then the Bikers for Trump are there to support police and do what all Americans should do – have their back and support the police.

If liberal snowflake protesters become violent, which they almost always do in large crowds, then they will probably all melt at the hands of Bikers for Trump.

You might see an avalanche of salty liberals rushing down the road on their run home to mommy and daddy.

The Wall of Meat sounds like a fun thing to watch on TV!!